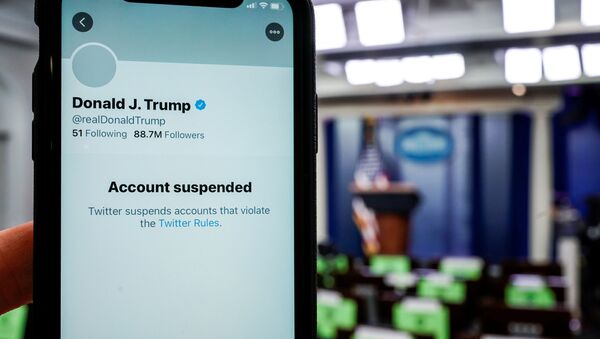 Twitter permanently banned the president’s personal account on Friday, claiming that his tweets contain the “glorification of violence.” His campaign’s @TeamTrump account was also suspended shortly afterwards. Following the ban, Trump began tweeting from the official @POTUS account, but those posts were deleted by Twitter almost immediately.

The most loyal supporters of outgoing US President Trump are leaving Twitter en masse after the social media platform blocked the president’s account forever. “Goodbye Twitter” was trending during the morning on Saturday, as Trump fans were displeased by the company’s decision, dubbing it an attack on free speech.

This will be my last Tweet... I will not be one of the Republican Trump supporters removed from Twitter. I one of the ones that LEFT Twitter. I’m tired of this crazy stuff... Goodbye and Good Riddance Twitter!!!

​Many of those unhappy with the ban claimed they are going to use Parler instead – it is a commonly dubbed “free speech" app popular with Trump supporters.

Good bye Twitter! You silence the President, and let the wicked reign with lies. Going to Parler!

​“I will not associate myself with a communication platform that decides I can’t make my own decisions,” one user wrote, urging the company to unblock Trump.

Goodbye Twitter. I will not associate myself with a communication platform that decides I cant make my own decisions. Let the President back on this platform.

​Another user said that while he was okay with Twitter banning the president’s personal account, it was not right to censor the official one, @POTUS, which was temporarily blocked shortly after Trump began tweeting from it.

Well time to say good bye to Twitter. Fine to delete @realdonaldtrump. But to sensor @POTUS this is too far when the post didn’t violate stated community standards. That page is not the property of Donald Trump. That is the for the person who is the President. @jack

​Some did not miss the opportunity to reflect on the US’ values and future regarding the situation.

It’s a dark day for America that published thoughts on Twitter are censored. Now it is a propaganda tool. I’m going away from Twitter. Goodbye.

Saying goodbye. The only reason I got a Twitter account was so I could hear what the President had to say but now that he has been censored I no longer want to support a platform that stifles free speech. Without a Spiritual revival this country will not last much longer.

​Twitter had been the main means of communication between Trump and his supporters, with nearly 90 million people following the president. After his ban, the company’s shares were down almost 4% in after-hours trading. Earlier this week, Mark Zuckerberg announced that POTUS’ Facebook and Instagram accounts will also be blocked for at least two weeks – until his presidential term is over.