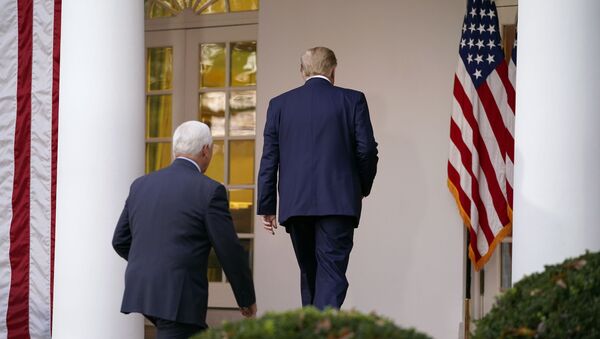 Asya Geydarova
Editor
All materialsWrite to the author
Trump and Pence have been apparently frustrated with each other lately, as the president had placed high hopes on Pence that he would block the congressional certification of Democrat Joe Biden's victory, which the vice president reportedly said he did not have the power to do.

President Donald Trump has reportedly not spoken with or in any other way reached out to Vice President Mike Pence since Trump supporters stormed the US Capitol building on Wednesday, January 6, to prevent Congress from certifying the results of the presidential election.

According to an NBC News reporter, Hallie Jackson, who cited a source familiar with the matter, Trump did not contact Pence as the violent events were unfolding in DC either.

NEW: I’m told that not only did the president not reach out to Vice President Pence on Wednesday night - he has not called him since, per a source familiar with the matter. It’s an extraordinary detail. I’ve asked the White House for comment, but so far no response.

According to another report, as protesters breached the Capitol and lawmakers were evacuated, Pence was hiding in "hardened rooms", and Trump did not contact him to check on his condition.

The New York Times reported on Tuesday that Pence told Trump he did not believe he had the power to reject the congressional certification of the 2020 election results, as the vice president was going preside over the session to count the votes. The conversation reportedly took place hours before President Trump tweeted that the vice president had the power to reject "fraudulently chosen electors".

"Mike Pence didn't have the courage to do what should have been done to protect our Country [sic] and our Constitution, giving States a chance to certify a corrected set of facts, not the fraudulent or inaccurate ones which they were asked to previously certify. USA demands the truth!" Trump said in a now-deleted tweet.

According to Republican Sen. James Inhofe, who had a "long conversation with Pence", the latter was frustrated with Trump urging him to overturn the results of the presidential election.

Biden has actually called it a "good thing" that Trump is skipping his inauguration, while saying that Mike Pence is "welcome" at the ceremony.

As the violent events unfolded on Wednesday, Pence took to Twitter to condemn the actions of Trump supporters, drawing a difference between a peaceful protest and an attack on a government building.

Peaceful protest is the right of every American but this attack on our Capitol will not be tolerated and those involved will be prosecuted to the fullest extent of the law.

​Trump repeatedly called on the protesters to remain peaceful and go home, but the violence continued, resulting in at least 5 people dead, including a female Air Force veteran and two police officers. Trump issued a video message later, condemning the protesters and conceding the 2020 election. The video was also deleted by Twitter.