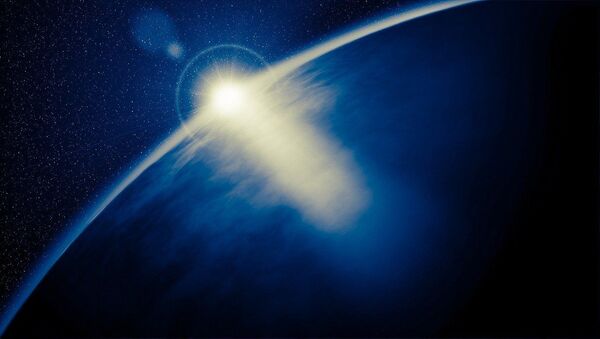 Lilia Dergacheva
All materialsWrite to the author
Nick Pope, a former head of the UK government’s UFO task force, says the latest stunning developments regarding the search for extra-terrestrial life, including the leak of US Navy pilots’ videos, have led him to believe we are on the threshold of some ground-breaking revelations.

British UFO expert Nick Pope is certain that the “clock is ticking” on new disclosures about the phenomenon that he said could have a far-reaching impact in the foreseeable future.

Mr Pope, who used to run the UK government’s now defunct UFO department, cited his sources as saying that the Ministry of Defence is looking into UFO sightings despite its officially-stated scepticism over the matter. UFO investigations were cancelled by the MoD at the end of 2009 on the grounds that they allegedly served no particular defence purpose and were diverting attention from more crucial operations.

“However, I understand from reliable and well-placed sources that this isn’t entirely correct, and that sightings are still being looked at, in the margins of other defence business, with terms like ‘UFO’ being scrupulously avoided, to try to avoid creating Freedom of Information Act liability”, the ex-head of the UFO desk said.

Pope also noted that a task force set up by the US government has already ostensibly shared some interim conclusions with its British colleagues, stressing that some of the upcoming revelations could be really “seismic”.

“There’s a momentum building up and there’s no smoke without fire. The clock is now ticking on the Senate Intelligence Committee’s demand for a report on the UFO phenomenon from the Director of National Intelligence”, Pope said, claiming the UFO revelations might come in due time, hand-in-hand with some other indirectly related initiatives, for instance a COVID-19 relief bill.

“A response is due within 180 days of the enactment of the COVID-19 relief bill, because this bill contained the Intelligence Authorisation Act, where the UFO requirement was articulated”, Pope explained, adding that “the US Department of Defence has known since June of the committee’s request, and the US Navy’s Unidentified Aerial Phenomena (UAP) Task Force is probably already working on drafting the response”, so the public may obtain it sooner than the late June deadline, he assumed.

The report, he went on, however important it may be, is only a part of a more complex process and “we’re going to see some big UFO stories in 2021”.

Pope also noted that due to the “globality” of the UFO phenomenon, “no single nation has a monopoly on any of this”, Mr Pope said.

“We know very little, for example, about what Russia and China know and think about the issue, or what their policy is with regard to the phenomenon. And for all we know, another nation may have a key piece of the puzzle, and may suddenly and unexpectedly make a move”, he assumed, citing many as saying that the coordinating role with this regard should be reserved for the UN as an international body.

The declassification was meant to “clear up any misconceptions by the public on whether or not the footage that has been circulating was real, or whether or not there is more to the videos”, the Pentagon said in a statement.

The footage, which shows unidentified objects flying at high speeds in the Earth’s atmosphere along with audio of Navy pilots expressing shock and awe, was initially leaked in 2007 and then in 2017. The footage was taken during training flights, with the 2017 leaks then published by the New York Times, which caused a huge stir at the time.