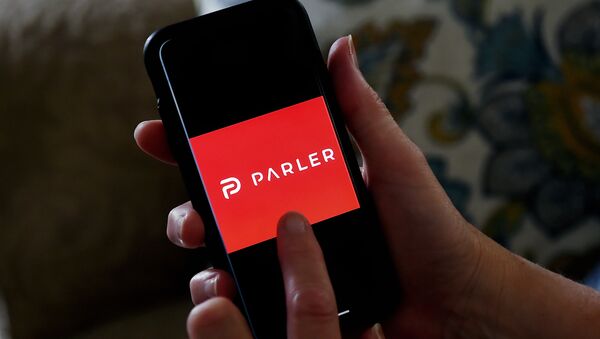 Kirill Kurevlev
Managing Editor
All materialsWrite to the author
Founded in 2018, Parler has become a relatively popular social platform among American conservatives and supporters of President Trump, as the app markets itself as embracing "free speech" and as a free alternative to conventional social media, which censors, according to some critics, those who hold rightwing views.

Apple finally removed Parler from its App Store after the expiration of the 24-hour ultimatum the corporation had given its moderators, The Verge reported Saturday.

The action follows that of Google's ban imposed on its acquired app in the company's own application store a day earlier.

“We have always supported diverse points of view being represented on the App Store, but there is no place on our platform for threats of violence and illegal activity. Parler has not taken adequate measures to address the proliferation of these threats to people’s safety. We have suspended Parler from the App Store until they resolve these issues,” a statement from Apple reads.

In addition, Amazon reportedly suspended the provision of web hosting services to Parler on Saturday evening for alleged calls for a coup, urging "patriots" to march on the US capital city on January 19, the day before the inauguration of the president-elect Joe Biden, carrying guns.

"[W]e cannot provide services to a customer that is unable to effectively identify and remove content that encourages or incites violence against others,” the company's email to Parler developers reads. “Because Parler cannot comply with our terms of service and poses a very real risk to public safety, we plan to suspend Parler’s account effective Sunday, January 10th, at 11:59 PM PST."

This move means that if the Parler developers fail to find another host for their platform, the app will go offline on Sunday.

On Friday, Apple demanded that the app developers remove some content that violates the corporation's policies and provide a plan on how the app's team would moderate users' content on the app in the future, giving them 24 hours to do so.

According to the report, Parler proposed changes but they reportedly were declined by Apple as "insufficient", and the app was subsequently removed with the statement addressing its developers obtained by The Verge.

"Parler has not upheld its commitment to moderate and remove harmful or dangerous content encouraging violence and illegal activity, and is not in compliance with the App Store Review Guidelines," the Apple's message to developers reads.

The app reportedly broke its download record during the time of the ultimatum, reaching #1 in the US section of the App Store before ultimately being pulled down.

On Friday, Google announced it was suspending the popular Parler app from their Play Store, on the basis of "this ongoing and urgent public safety threat."

While users of the Android operating system still may reportedly access the app via third parties app stores, the users of iOS are deprived of such an opportunity due to the absolute monopoly of the App Store on their devices.

Trump Supporters Quit Twitter en Masse Following POTUS’ Suspension
The suspension of the app popular with right-wing supporters follows that of Twitter blocking Trump's official account "permanently" due to the risk of "further incitements of violence." In addition, Facebook announced it was suspending Trump's accounts on all its platforms, including Instagram, at least for the remainder of his time in office for similar reasons.

There have been reports alleging that the app was actively used by far-right activists for the planning and coordination of the riots in the US capital on Wednesday.