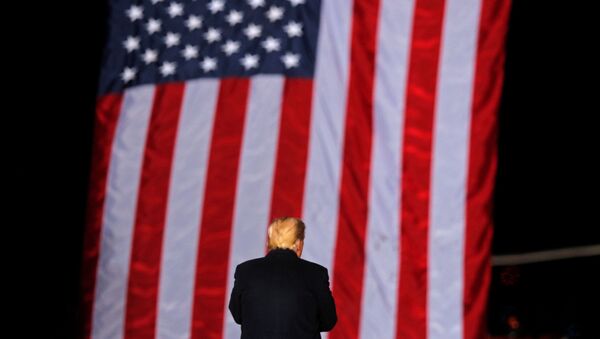 © REUTERS / BRIAN SNYDER
Subscribe
Gaby Arancibia
All materialsWrite to the author
Trump has been fighting for two months to ensure what the president called the "legitimate results" of the 2020 election, insisting that his victory was "stolen" by Democrats via massive voter fraud.

US President Donald Trump issued a video address late Thursday condemning the violent actions that unfolded at the US Capitol the day prior and acknowledged that a “new administration would be inaugurated” on January 20, 2020.

Trump's address marked the very first since his Twitter locked his account for 12 hours over what the social media platform considered a violation of its policy rules. The remarks came less than two hours after White House Press Secretary Kayleigh McEnany held a press briefing in which she voiced the first official condemnation from the White House of the violent riots.

“Like all Americans I am outraged by the violence, lawlessness and mayhem,” Trump said in the video address. “The demonstrators who infiltrated the Capitol have defiled the seat of American democracy.”

"And to those who broke the law, you will pay," he added, before noting that "we must get on with the business of America."

“Now, Congress has certified the results. A new administration will be inaugurated on January 20. My focus now turns to ensuring a smooth, orderly and seamless transition of power," he continued. “This moment calls for healing and reconciliation.”

Recalling the many legal challenges submitted across several US states in a bid to contest the results of the US election, Trump remarked that his "only goal was to ensure the integrity of the vote.” He stressed that his intentions were "to defend American democracy.”

“We must revitalize the sacred bonds of love and loyalty that bind us together as one national family,” he said, before adding to his “wonderful supporters” that their “incredible journey is only just beginning.”

Trump supporters breached the Capitol on Wednesday afternoon as the congressional certification of Democrat Joe Biden's victory in the 2020 election was underway. Prior to that, Trump told supporters that he refused to concede and called on them to keep fighting to prevent the election from being “stolen”.

The siege forced lawmakers to halt the meeting and leave the building immediately, with some of them having to hide in a shelter. The protesters attacked police with metal pipes and chemical irritants, damaged property, seized the inauguration stage and occupied the rotunda inside the Capitol building.

“The violence and destruction of property at the US Capitol building yesterday showed a blatant and appalling disregard for our institutions of government and the orderly administration of the democratic process,” FBI Director Christopher Wray said on Thursday, vowing that those involved in the siege will be held accountable.

The ransacked office of the Senate Parliamentarian: pic.twitter.com/E7PsSgoAEX

At least four people have died as a result of the chaos, including a female Air-Force veteran who was shot inside the Congress hall by a police officer.

UK Prime Minister Boris Johnson said, “I think that what the president has been saying about that is completely wrong.”

Following the siege, US Capitol Police Chief Steven Sund stepped down on Thursday, just hours after Senate Sergeant Arms Michael Stenger resigned from his position. Senator Chuck Schumer had claimed he would fire Stenger himself if he did not voluntarily leave by the time Democrats take office.

Trump Concedes as Calls for Impeachment Rise Among Democrats

The events on Wednesday quickly triggered efforts to oust Trump, including either through invoking the 25th Amendment, which would see removing Trump from power and installing Vice President Mike Pence instead, or by initiating an impeachment procedure against the US president.

On Thursday, US House Judiciary Committee Chairman Jerry Nadler claimed impeachment charges against President Trump should be brought directly to the House floor.

I am once again urging that President Trump be impeached and removed from office. We have a limited period of time in which to act. The nation cannot afford a drawn out process and I support bringing articles of impeachment directly to the House floor.https://t.co/xpuFwaLTC0

The idea of impeachment was earlier voiced by Senate Democratic Leader Chuck Schumer and House Speaker Nancy Pelosi, with the latter saying her “friends we are in a very difficult place as a country as long as Donald Trump remains in The White House”.

“If the vice president and the Cabinet refuse to stand up, Congress should reconvene to impeach the president”, Schummer said on Thursday.

Speaker Pelosi says that if Pence and the Cabinet doesn’t move on the 25th amendment she’s willing to move to impeach.

“my friends we are in a very difficult place as a country as long as Donald Trump remains in The White House.”

According to the New York Times and Business Insider, Pence is opposed to using the 25th Amendment in order to remove President Trump from office.

The riot in DC also prompted fellow Republicans to reverse their previous intentions to support Trump's bid to overturn the results of the November 3 election, with US Senator Kelly Loeffler saying she “cannot now in good conscious object to the certification of these electors.”

Former Attorney General Barr slammed Trump over what he called a “betrayal of his office and supporters”, claiming he was responsible for “orchestrating a mob to pressure Congress.”

Additionally, acting US Attorney for the District of Columbia Michael Sherwin announced earlier Thursday that the Department of Justice was “looking at all actors” involved in the riots, not ruling out that Trump could also be charged in connection with the riot at US Capitol.

The idea of launching an impeachment proceeding, however, was not echoed by President-elect Joe Biden, who supports a peaceful transition of power. Acting Pentagon chief Christopher Miller also said on Thursday that the Defense Department is determined to perform its duties “in accordance with our oath of office”, and will execute “the time-honored peaceful transition of power” to Biden.

Sen. Lindsey Graham acknowledged on Thursday that Trump's actions "were the problem", but said he did not regret supporting him over his tenure in the office. He also added Trump's accomplishments were "tarnished by yesterday".

“He won my state and became president of the United States. I decided then it's not about me, it's about my job,” Graham said.

In another blow to Trump, his social media accounts were locked on Wednesday night, blocking the US president from his audience of nearly 150 million. As the violent events unfolded at the US Capitol complex, Trump tweeted to call on protesters to leave the building and respect law and order.

However, two other similar tweets, in which Trump mentioned the "election fraud" he has been fighting against for two months, have been since deleted by Twitter, before it locked the president's account for 12 hours. As a follow-up, Facebook blocked Trump from using his official page for an indefinite period of time. Instagram locked Trump's page in a similar move.

Facebook has banned Trump for the platform for the next two weeks. A total reversal of every position Zuckerberg took since Trump began his campaign in 2015. pic.twitter.com/6Bdy7tApoz

The US Congress certified Biden's victory earlier on Thursday. The former vice president won the US presidential election by a 306-232 electoral vote margin, although over a dozen senators and 100 members of the House objected. It was, however, insufficient to stop Congress from approving the results and prevent Biden from swearing on the Bible as the 46th US President on January 20.