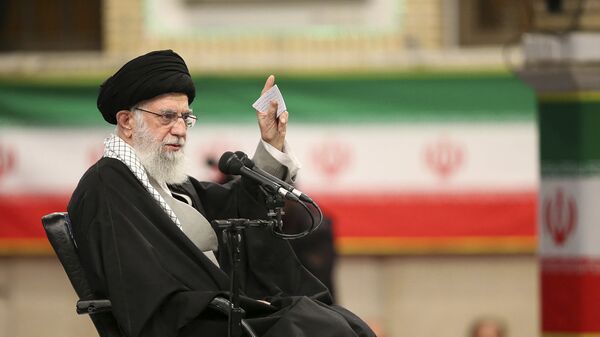 Jason Dunn
All materialsWrite to the author
As President-elect Joe Biden is set to ascend to the White House, Iran is seeking to end the economic restrictions put in place by the Trump administration.

Iran’s Supreme Leader Ali Khamenei has issued an ultimatum to the United States demanding the lifting of harsh economic sanctions but is not in a hurry to see Washington re-enter the 2015 nuclear agreement.

In a publicly broadcast speech on Friday, the supreme leader said Iran does not insist on and is in no rush for the US to re-sign the Joint Comprehensive Plan of Action (JCPOA), which established limits on Tehran’s nuclear enrichment. Instead, Khamenei demanded the alleviation of sanctions placed on the country.

“Sanctions are a treachery and crime against the Iranian nation and must be lifted,” the country’s most powerful leader said.

“But we must also plan our economy in a way that we could run the country well despite sanctions”, he said, reiterating the previous comments made by the Iranian leader that Tehran must attempt to nullify sanctions as well as see them lifted.

Khamenei expressed his support for legislation that pressed Iran to increase its uranium enrichment to 20 percent. This move began on 4 January and drew criticism from the 6 countries in the European Union who are signatories to the nuclear deal.

“When the other side implements almost none of its commitments as part of the JCPOA, it would be meaningless for the Islamic Republic to implement all its commitments under the JCPOA”, he added. “If they return to their commitments, we will too.”

Khamenei issued criticism of the United States' political system following the storming of the Capitol building in Washington by pro-Trump protesters on Wednesday.

Have you seen the situation in the U.S.? This is their democracy and this is their election fiasco. Today, the U.S. & 'American values' are ridiculed even by their friends.

Since withdrawing from the JCPOA in May 2018, the Trump administration instituted a relentless sanctions regime on Iran, seeing its oil exports collapse and nearly crippling the country’s economy.

Just two weeks before Joe Biden ascends to the White House, the president-elect has pledged to end the “maximum pressure” campaign adopted to put in place by Donald Trump and re-enter the nuclear deal, which had seen sanctions removed in return for an end to Iran's uranium enrichment program.

Prior to the US withdrawal, international observers all certified that Iran was in complete compliance with the agreement.

The spiritual leader’s comments come amid the worsening of relations between Tehran and Washington on the anniversary of the assassination of Iran’s top general Qassem Soleimani, who was killed in a drone attack on the order of Donald Trump in Baghdad on January 3, 2020.