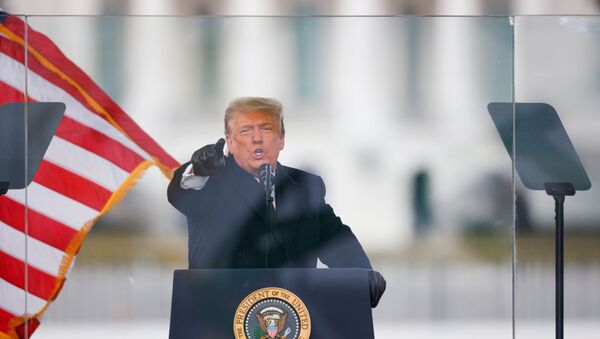 Evan Craighead
All materialsWrite to the author
Twitter moved to restrict social media engagement with tweets authored by US President Donald Trump and others after pro-Trump demonstrators protesting the results of the 2020 US presidential election breached the Senate and House of Representatives in Washington, DC, prompting both chambers of Congress to go under lockdown.

The Twitter Safety team announced Wednesday evening that it would be locking the US president's personal Twitter account for 12 hours after he removes a total of three tweets "that were posted earlier today for repeated and severe violations of our Civic Integrity policy."

"This means that the account of @realDonaldTrump will be locked for 12 hours following the removal of these Tweets," the social media team tweeted. "If the Tweets are not removed, the account will remain locked."

Earlier Wednesday, the social media platform's safety team announced it would be "working proactively to protect the health of the public conversation occurring on the service and will take action on any content that violates the Twitter Rules."

"Threats of and calls to violence are against the Twitter Rules, and we are enforcing our policies accordingly," the Twitter team wrote on January 6.

"In addition, we have been significantly restricting engagement with Tweets labeled under our Civic Integrity Policy due to the risk of violence," Twitter Safety highlighted.

We've assessed two policy violations against President Trump's Page which will result in a 24-hour feature block, meaning he will lose the ability to post on the platform during that time.

With his accounts now restricted from posting on Twitter, Facebook, and Instagram, President Donald Trump has been blocked from a combined audience of nearly 150M followers.

Hours after the move, Snapchat also joined the social media giants in restricting Trump's ability to share new content until the app decides to unlock his account.

“We can confirm that earlier today we locked President Trump’s Snapchat account”, Snap spokeswoman Rachel Racusen said in a statement.

Netizens quickly took notice to Twitter's policy enforcement, as at least three posts tweeted from Trump's account were deleted soonafter. One of the tweets deleted by the social media platform took aim at US Vice President Mike Pence, who - as president of the US Senate - is presiding over the Electoral College vote certification.

"Mike Pence didn't have the courage to do what should have been done to protect our Country [sic] and our Constitution, giving States a chance to certify a corrected set of facts, not the fraudulent or inaccurate ones which they were asked to previously certify. USA demands the truth!" Trump said in a tweet that was soon flagged by Twitter as a disputed "claim of election fraud."

The social media platform's advisory also claimed Trump's tweet could potentially contribute to the "risk of violence" occurring in the nation's capital. While Twitter blocked users from liking, retweeting and replying to some of Trump's flagged tweets, the website ultimately deleted Trump's anti-Pence tweet - as well as two other posts issued later Wednesday afternoon.

"The violent protests in the Capitol today are a disgrace," Facebook spokesperson Andy Stone told CNN. "We prohibit incitement and calls for violence on our platform. We are actively reviewing and removing any content that breaks these rules."

This is an emergency situation and we are taking appropriate emergency measures, including removing President Trump's video. We removed it because on balance we believe it contributes to rather than diminishes the risk of ongoing violence.

"Our brightest days are before us," Trump told supporters in Washington, DC, for the "Save America" march. "One of our great achievements will be election security. Because nobody, until I came along, had any idea how corrupt our elections were."

"The Democrats are hopeless. They're never voting for anything. Not even one vote. But we're going to try and give our Republicans-- the weak ones because the strong ones don't need any of our help. We're going to try and give them the kind of pride and boldness that they need to take back our country," Trump told supporters, who then broke out into a "U-S-A" chant before marching down Pennsylvania Avenue.

After energizing protesters, the US president took to Twitter some hours later and urged pro-Trump demonstrators to "remain peaceful. No violence!"
"Remember, WE are the Party of Law & Order – respect the Law and our great men and women in Blue. Thank you!" he tweeted.

A YouTube spokesperson told The Verge that teams have “working to quickly remove livestreams and other content that violates our policies, including those against incitement to violence or regarding footage of graphic violence."

According to the spokesperson, YouTube site moderators have been actively removing streams that are viewed to incite or encourage violence. Footage that showed people carrying firearms in the nation's capital were also allegedly removed. Though legal gun owners can carry their firearm in a concealed state, Washington, DC, does not permit open carry for civilians.

While social media sites appear to be taking more accountability for content disseminated via their platform, notorious comedian Sacha Baron Cohen urged industry executives to do more to combat the "violent attack on American democracy" committed by Trump.

Is that FINALLY enough for you to act?!

It's time to ban Donald Trump from your platforms once and for all! pic.twitter.com/4oWoiMu0eC