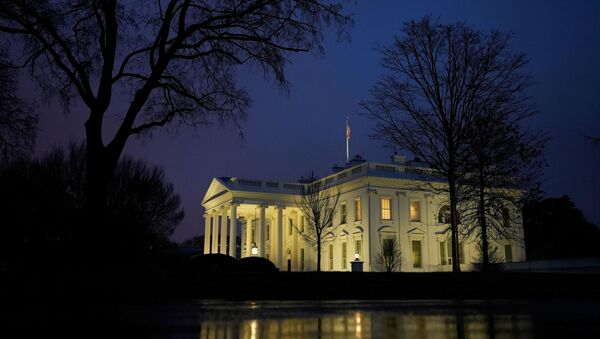 Asya Geydarova
Editor
All materialsWrite to the author
The news comes as several Republicans, who earlier supported Trump's bid to reverse the 3 November election, have decided to support the certification of Biden's victory following unrest at the US Capitol.

According to the report, they have not yet formally presented the proposal to Vice President Pence, whom the aforementioned amendment would make the US president.

Earlier in the day, Trump protesters violently stormed the US Capitol building, destroying property and seizing the rotunda room, as Congress was trying to certify the results of Democrat Joe Biden's presidential victory. The mass riot erupted after Trump in a speech vowed to never concede and called on the crowd to keep fighting.

As the peaceful rally grew violent, Trump has repeatedly called on protesters to remain peaceful and respect law and order. However, his Twitter account was suspended for 12 hours later over "violations of the social media platform's policy". Echoing Twitter, both Facebook and Instagram locked the president's accounts for 24 hours, ultimately blocking him from nearly a 150-million audience.

​The two other tweets posted by Trump have been deleted.

A curfew is now in effect in the District of Columbia and according to reports, law enforcement agencies are now pushing protesters away from Capitol Hill. At least 13 arrests were made and around a half dozen weapons seized. One woman was shot and killed during the clashes.

In the early evening, Congress resumed the session after officials said they had secured the US Capitol building.

Following the unrest, several Republicans have reversed their earlier vows to block congressional certification of Democrat Joe Biden's victory on Wednesday. Likewise, US Senator Kelly Loeffler during remarks on the Senate floor said she will no longer object to the Electoral College votes after today's violent siege of the Capitol Building.

However, Republican Senator Josh Hawley during remarks on the Senate floor did not reverse his decision to object the Electoral College votes.

"It's very vital what we do - the opportunity to be heard, to register objections is very vital because this is the place where those objections are to be heard and dealt with, debated and finally resolved," Hawley said.

Vice President Mike Pence, on whom Trump placed high hopes that he would block the certification of the election results, has condemned the violent events in DC, saying it will not be tolerated by the government.

"Peaceful protest is the right of every American but this attack on our Capitol will not be tolerated and those involved will be prosecuted to the fullest extent of the law.", the vice president tweeted.

And we will always be grateful for the men and women who stayed at their post to defend this historic place. To those who wreaked havoc in our Capitol today, you did not win. Violence never wins. Freedom wins. And this is still the People's House. pic.twitter.com/ytErRKnk4O

​Media reported on Tuesday that Pence told Trump he did not believe he had the power to reject the certification of Biden's victory in the presidential election.