Tensions Subside in DC After Protesters Stormed US Capitol, Clashed With Police - Videos 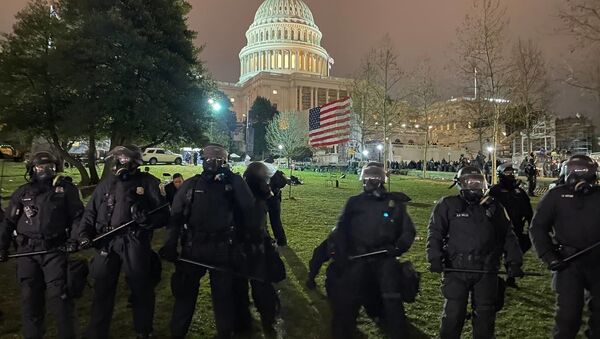 Asya Geydarova
Editor
All materialsWrite to the author
Earlier in the day, tens of thousands of pro-Trump supporters had the Capitol Building under siege as lawmakers attempted to give the final stamp of approval for President-elect Joe Biden's win in the 2020 presidential election.

Police managed to secure the US Capitol on Wednesday, driving protesters away from the building after it was breached.

As a result of the violence, one woman was shot and, unfortunately, died at a local hospital. According to media reports, she was a Trump supporter who was shot by a law enforcement officer inside the US Capitol. 13 people have been arrested and five weapons seized, DC police said.

Videos from the scene show law enforcement officers wearing riot gear and holding shields as they disperse the protesters.

Tensions have subsided in Washington, DC, as police reinforcements arrive and push Trump supporters away from the Capitol building [3/3] https://t.co/W74k8tZJy9 pic.twitter.com/XbjYxj31On

Tensions have subsided in Washington, DC, as police reinforcements arrive and push Trump supporters away from the Capitol building [1/3] https://t.co/W74k8tZJy9 pic.twitter.com/Fn9liGeGoh

According to a Sputnik correspondent, AP TV crew was attacked by protesters amid the unrest.

President Donald Trump delivered a speech near the White House in front of thousands of supporters as Congress held a joint session to finalize the certification of Joe Biden's presidential election victory. Soon after, pro-Trump supporters stormed Congress, which forced lawmakers to evacuate.