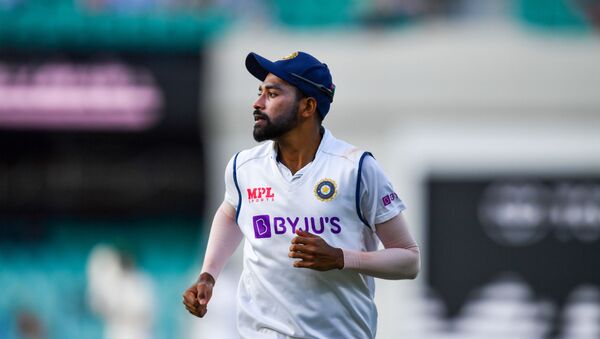 As the Indian national anthem played ahead of the third Test Match of the ongoing Border-Gavaskar Trophy, fast bowler Mohammed Siraj turned emotional on Thursday.

Tears rolled down the 26-year-old pacer's cheeks; he wiped them off, but the moment was captured on camera.

The video of the incident was tweeted by Cricket Australia.

It has been an emotional series for Siraj so far, as his father died just two months ago due to a lung ailment. But the pacer decided to stay out of the country and not head home for the funeral.

Soon after his father’s death, in a short interview, the pacer said that he would want to continue playing for India as this was his father’s dream.

A lot of cricket lovers have reacted to this video. One of the fans tweeted, “Very touching." Another fan tweeted, "There is no love greater than the love of the nation."

There is no love greater than the love of the nation,when the #NationalAnthem is played,that moment becomes emotional & tears fill in the eyes with joy&show the love that's Why#Siraj in tears during the National Anthem.
This shows the love & respect towards our country.#INDvAUS pic.twitter.com/3VE7zFoIDz

Mohammed Siraj gets emotional during national Anthem at SCG. Siraj Your father is watching you and he is very proud. #AUSvIND 🇮🇳 pic.twitter.com/WMDj5WyoB4

Mohammed Siraj in tears during the national anthem 🇮🇳

Mohammed Siraj's tears swelling up and falling over for the Indian national anthem is already my moment of the day. #AUSvIND

Siraj made his Test debut in the second Test match at Melbourne. He replaced injured Mohammed Shami in the Indian Test squad which is touring Australia at the moment.

The Indian cricket team arrived for the third Test at Sydney after a resounding 8-wicket victory at the Boxing Day Test in Melbourne. While Australia have won the ODI series, India came on top in the T20Is and after the first two Tests, the scores are tied 1-1.