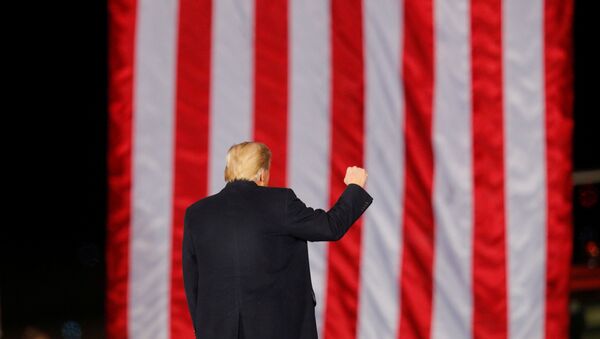 Ekaterina Blinova
All materialsWrite to the author
After US protesters stormed the Capitol amid the joint congressional session aimed at certifying the Electoral College votes, a number Democrats and Republicans floated the idea of invoking the 25th Amendment to remove Donald Trump from office 13 days before Joe Biden's inauguration. US observers have weighed up the odds for the move.

On Wednesday, House Judiciary Committee Democrats wrote a letter to Vice President Mike Pence urging him and sitting Cabinet secretaries to determine the president as "unfit" under Section 4 of the 25 Amendment. The letter claimed that Trump's "willingness to incite violence and social unrest to overturn the election results by force" resulted in the chaotic takeover of the Capitol building. The National Association of Manufacturers also called upon Pence to "seriously consider working with the cabinet" to invoke the amendment in order to "preserve democracy". Meanwhile, some Democratic representatives have called for impeaching Trump to disqualify the incumbent president from holding federal office in the future.

All the Democrats on the House Judiciary Committee just wrote a letter to Vice President Pence, urging him to invoke the 25th Amendment to remove Trump: pic.twitter.com/6VrcHI5hMr

​Will the GOP Remove Trump Before Biden's Inauguration?

There's a real possibility that Pence and the Cabinet might go forward with the 25th Amendment option, deems Robert C. Hockett, an American lawyer and policy advocate.

"Legally, all that is required to remove Mr Trump is for Mr Pence and a majority of the Cabinet to agree on the need of removal", he says. "Mr Trump could attempt to contest that finding in Congress, but the process for doing that takes 28 days - well beyond Mr Biden's inauguration - during which Mr Pence remains Acting President. So as a practical matter all that is needed to remove Trump from office for the remainder of his term is agreement among Mr Pence and a majority of the Cabinet."

Many Republicans believe that the president crossed the line on 6 January, believes Mark Jones, a professor of political science at Rice University’s Baker Institute for Public Policy.

"He had been crossing the line over the past month by disputing the election results and refusing to concede", he opines. "But yesterday was the straw that broke the camel's back, because he acted in an irresponsible way, instigated a mob, stormed the US Capitol."

Nevertheless, Section 4 of the 25th Amendment has never been invoked and appears to be a long shot, according to Thomas Sutton, professor and political analyst at Baldwin Wallace University in Ohio.

"It is unlikely that Vice President Pence will convene the Cabinet to invoke the 25th Amendment to declare that Trump is ‘unable to discharge the duties and responsibilities of his office'", he believes. "This section requires that such a declaration be approved by a two thirds vote of the House and Senate. With thirteen days left until Biden’s inauguration, the timing serves as a rationale for not invoking the 25th Amendment. In addition, Pence will not risk further provocation of Trump supporters, which could result in additional mass protests and violence."

The professor admits, however, that Trump and Pence are currently at odds after the vice president refused to challenge the Electoral College's decision.

"Pence’s resistance to Trump’s pressure to change the Electoral College vote will likely cause a rift with Trump", Sutton believes. He suggests that the vice president is likely to continue to work "to keep the support of Trump voters while distancing himself from the violence of the mob at the Capitol". 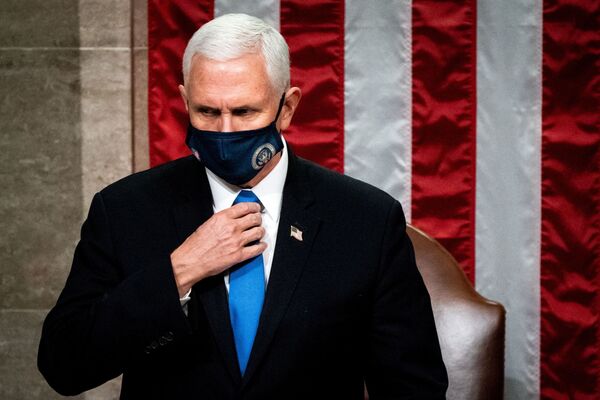 Vice President Mike Pence presides over a Joint session of Congress to certify the 2020 Electoral College results after supporters of President Donald Trump stormed the Capitol earlier in the day, on Capitol Hill in Washington, U.S. January 6, 2021. Erin Schaff/Pool via REUTERS
© REUTERS / POOL

It still remains to be seen whether the executive branch and Congress will opt to impeach Donald Trump or invoke the 25th Amendment, suggests Dr Meena Bose, political science professor and director of the Kalikow Centre for the Study of the American Presidency at Hofstra University.

"The resignations that have taken place within the White House, that are pending, questions about a call for impeachment, possibly invoking the 25th Amendment - the universal condemnation from not just Democrats, but within the president's party – make clear that the Republican Party has finally had enough", she says.

It cannot be ruled out that Vice President Pence will bow to the pressure and kick off the process of invoking the 25th Amendment despite being Trump's longtime ally, believes American writer E. Michael Jones, an editor of the magazine Culture Wars.

However, if the vice president goes for it, it will hurt the GOP tremendously, the writer warns: "Trump rejuvenated the party by turning it back to the American first party of the 1930s", he says, adding that after collaborating in the deposing of Trump the Republican Party "will have no reason to exist anymore".

"If you're a Republican, you're trying to look for a silver lining", says Mark Jones. "The silver lining may be that President Trump went too far yesterday and went from mere rhetoric to actual physical violence. And that, I think, undercut his support from segments of the Republican Party that simply, I think, have come to the conclusion that the party has no real future. I think you're going to see an effort by Republicans to do everything possible to push him into the background as much as they can." 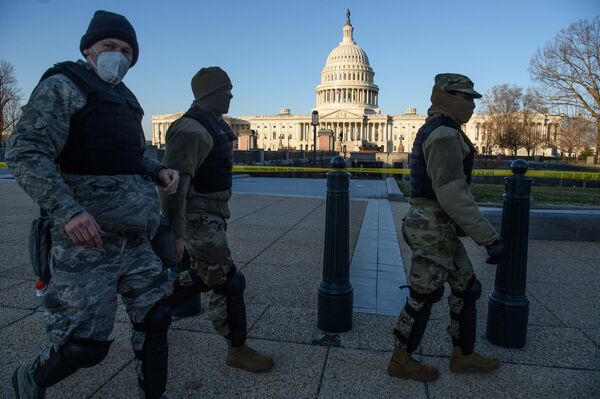 Members of the DC National Guard walk past the US Capitol in Washington, DC, on January 7, 2021, one day after supporters of outgoing President Donald Trump stormed the building.
© AFP 2022 / NICHOLAS KAMM

What are Trump's Odds of Running in 2024 After Capitol Hill Breach?

The Capitol Hill protests have also dealt a blow to Trump's possible 2024 presidential bid, according to Thomas Sutton.

"Democrats and some Republicans will hold Trump responsible for inciting the Capitol riot due to his continued refusal to accept the results of the election", he presumes. "Rival Republicans will compete to gain the support of Trump voters as potential candidates for a presidential nomination in 2024."

President Trump's chances for 2024 after the 6 January events on Capitol Hill seem "almost zero", echoes Meena Bose. She argues that Trump's attempts to challenge the outcome of the 2020 election over the suspected voter fraud have deepened partisan polarisation and created further division within American society. "This is an unprecedented time for the United States", the political scientist underscores. "There is a need for clear, need for new leadership, governance and a move toward a conciliatory, cooperative democracy."

It's too early to make any prognoses with regard to Trump's possible run in 2024, according to E. Michael Jones: "We cannot talk about 2024, these are not normal circumstances", he says. "You can't look that far into the future now."

The writer says that the event has already prompted a lot of controversy, given that there have been claims by Twitter users that some of the participants of the breach previously took part in Black Lives Matter and Antifa protests.

​"There are reports that are saying that the people who did come in, who were leading the charge were Antifa, it wasn't Trump supporters", he suggests. "There are pictures that seem to prove that - the man with the beard, the guy with the big Viking hat. This is political theater, especially the way that man is dressed."

Jones shreds the assumption that Trump supporters will resort to further protests: "There'll be no more protests, no more violence", he believes. Nevertheless, the writer expects that the media will now pin the blame on President Trump for the invasion of Congress and the death of an unarmed woman shot down in the Capitol building.

Four people died during the Wednesday protests on Capitol Hill: one of them was a woman, identified as a US Air Force veteran, who was shot by the police, while the other three "died as a result of medical emergencies", according to the Associated Press. In the wake of the protests, over 52 people were arrested; of them, 47 were detained due to violations of the curfew set on 6 January by DC Mayor Muriel Bowser.

"Even though I totally disagree with the outcome of the election, and the facts bear me out, nevertheless there will be an orderly transition on January 20th," the president said in a Twitter statement posted by his communications adviser Dan Scavino. Trump's own account was temporarily suspended by Twitter and Facebook following the violent protests.