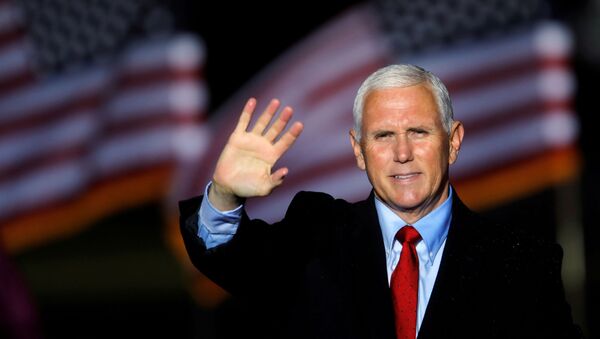 Svetlana Ekimenko
All materialsWrite to the author
As a joint session of Congress convened on Wednesday to certify the Electoral College vote and confirm President-elect Joe Biden's election win, supporters of President Donald Trump breached the Capitol in Washington. Four people died in the violence, according to the DC Police Chief, and a curfew in effect in the District of Columbia.

"For the sake of our democracy, we emphatically urge you to invoke the 25th Amendment and begin the process of removing President Trump from office," reads the letter, led by Reps. David Cicilline (D-R.I.) and Ted Lieu (D-Calif.).

NEW: I am sending a letter with @RepTedLieu and our colleagues on the House Judiciary Committee, calling on Vice President Pence to invoke the 25th Amendment to remove Donald Trump from office after today’s events. pic.twitter.com/5VK8DLTLn4

​As they underscore the importance of removing President Trump from office after he ostensibly incited the riot that resulted in a mob violently breaching the US Capitol earlier on Wednesday, they add:

"President Trump has shown time and again that he is unwilling to protect our democracy and carry out the duties of the office."

The 25th Amendment would enable Vice President Mike Pence to become acting president if he and a majority of the Cabinet declare the president as being unable to execute his duties.

The letter comes as reports claimed Republican officials were mulling drastic steps ranging from impeachment to invoking the 25th Amendment, to allow Mike Pence to take over from the sitting president, reported Axios.

Amid what President-elect Joe Biden denounced as “disorder”, bordering on “sedition”, a growing number of Democrats are calling for the impeachment of President Donald Trump, underscoring his purported role in egging on his supporters to storm the Capitol on Wednesday.

​They also cite that further ‘damage’ could yet be caused by the sitting president in the final two weeks of his term.

The lawmakers are led by Democratic House members, and also include Massachusetts Sen. Ed Markey and Illinois Gov. J.B. Pritzker, with a Republican, Vermont Gov. Phil Scott, also urging that Trump be removed from office.

“Despite the seditious attempt to overthrow our democracy, we in Congress will fulfil our duty to ensure the will of the people and the integrity of our democracy are upheld. But the next days and weeks remain dangerous. Donald Trump is a traitor to our country and our Constitution. He must be removed from office and prevented from further endangering our country and our people,” said Assistant House Speaker Katherine Clark (D-Mass.) in a statement.

With President-Elect Joe Biden’s swearing in ceremony set to take place on 20 January, it is unlikely that an impeachment process might be taken up by the Senate in the time left, writes POLITICO.

According to Rep. Tom Malinowski (D-N.J.), cited by the outlet, impeaching the president for a second time is an “incredibly serious matter.”

“The president encouraged a violent attack on the United States Capitol to prevent Congress from exercising our constitutional duties. That’s about as impeachable an act as I can think of. I would want to make sure if we move forward that we do it swiftly and in a bipartisan way and I don’t think that that’s impossible.”

However, he added that the “first order of business” was to certify the election. After that, he said, “additional steps might be warranted to express our revulsion with the president’s actions”.

Another Democrat, Rep. Carolyn Bourdeaux (D-Ga.), was quoted by the publication as saying:

“Not since its burning in 1814 has so much damage been done to this building, a building that symbolises to the world the strength and greatness of our democracy. It has never been more urgent for my colleagues to uphold the pillars of our democracy and put an end to the conspiracy theories that fuelled this insurrection attempt.”

According to the outlet, as of mid-evening Wednesday, at least 32 House members have rallied behind the suggestion that Donald Trump should be impeached, with a staffer for a House member cited as saying the plan has “substantial support”.

Rep. Ilhan Omar (D-Minn.), who announced she was drawing up articles of impeachment, went on Twitter to underscore that it was a “matter of preserving our Republic”.

I am drawing up Articles of Impeachment.

Donald J. Trump should be impeached by the House of Representatives & removed from office by the United States Senate.

We can’t allow him to remain in office, it’s a matter of preserving our Republic and we need to fulfill our oath.

Breach of the Capitol

Earlier in the day, thousands of protesters congregated in Washington, DC, as a joint session of Congress convened to certify the Electoral College vote that would officially make US President-elect Joe Biden the winner of the 2020 presidential election.

Police on Capitol Hill responded with drawn guns and teargas as hundreds of protesters stormed the building and sought to force Congress to undo President Trump’s election defeat https://t.co/PnRtbCWuX4 pic.twitter.com/cKdUy8cvoh

​President Donald Trump, in a speech on Capitol Hill addressing his supporters on Wednesday, vowed to never concede and railed against the ‘rigged’ election.

He slammed the outcome of the election an “egregious assault on our democracy”, as he urged them to “walk down to the Capitol”.

“We are going to cheer on our brave senators and congressmen and women… and we are probably not going to be cheering so much for some of them — because you will never take back our country with weakness,” said Trump.

As the president returned to the White House, Trump protesters violently stormed the US Capitol building, destroying property and seizing the rotunda room, disrupting the process of the vote certification.

With the Capitol under lockdown, members of Congress took cover or fled the building, as shots were fired. According to the DC police chief, four people died in the violence.

I am currently sheltering in place in the Capitol complex. My staff and I are safe and secure as protests occur on Capitol grounds. We are following Capitol Police orders and are grateful for their quick response.

​Congress resumed the joint session to certify President-elect Joe Biden's win, as a public emergency for total of 15 days, until further notice was set in place by D.C. Mayor Muriel Bowser for the District.

I have issued Mayor’s Order 2021-003, extending the public emergency declared earlier today for a total of 15 days, until and unless provided for by further Mayoral Order.