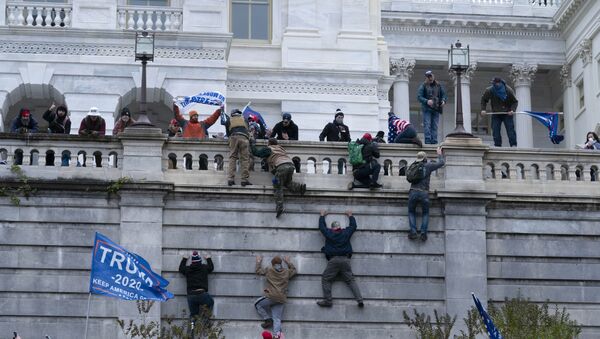 Ilya Tsukanov
All materialsWrite to the author
Trump supporters stormed the Capitol on Wednesday as Congress met to formally certify the election in Joe Biden’s favour, smashing windows and breaking down doors as lawmakers and their aides scurried to safety. The US Army deployed the DC National Guard and sent soldiers to the Capitol Building, while city authorities imposed a 6 pm curfew.

The Federal Bureau of Investigation’s Washington Field Office has issued a bulletin calling on members of the public to help identify protesters who broke into the Capitol Building on Wednesday and caused a ruckus.

“#FBI is seeking info that will assist in identifying individuals who are actively instigating violence in Washington, DC,” the domestic security agency indicated in a pair of tweets early Thursday morning.

If you have witnessed unlawful violent actions, we urge you to submit any information, photos, or videos that could be relevant to the #FBI at https://t.co/NNj84wkNJP. pic.twitter.com/W2d95QvIfL

The FBI specified that it was accepting both tips and digital media “depicting rioting and violence” in the Capitol Building and surrounding area, and urged people “to submit any information photos, or videos that could be relevant” via a special form on the bureau’s website.

At least 52 people have been arrested in connection with Wednesday’s events, according to Metropolitan DC Police. Four protesters are dead, with one – former Air Force veteran Ashli Babbitt – reportedly succumbing to a gunshot wound to the head. Six people including one law enforcement officer have been sent to hospital with injuries of varying severity.

Videos: US Senate, House Halt Election Certification After Protesters Storm Capitol Building
Users have posted hundreds of photos and dozens of videos from the scene of the unrest on social media, with images featuring a wide range of activity, from protesters smashing down doors and windows to break into the Capitol to scuffles with police both outside and inside the compound, not to mention an armed standoff by the House chamber door. The photos and videos did not appear to show the kind of widespread vandalism that accompanied last year’s BLM protests, although some looting did take place.

Social media users responded to the FBI’s tweets with a mix of partisan bickering and genuine tips, with some urging the agency to arrest Trump allies including Missouri Senator Josh Hawley and Texas Senator Ted Cruz, Rudy Giuliani, conspiracy theorist Alex Jones, or even President Trump himself. Others sarcastically asked if the FBI has ever heard of browsing social media, or encouraged the agency to “check Twitter because many videos are published with names and hometowns.” Trump supporters blamed the Democrats for the alleged election fraud which prompted the unrest. One user also suggested the FBI question “the @CapitolPolice who were posing for selfies” with rioters amid reports that some officers appeared to express sympathy to the protesters.

This man is staying at the Willard Hotel. An agent could walk two blocks and arrest him right now: https://t.co/JAcftkou4S