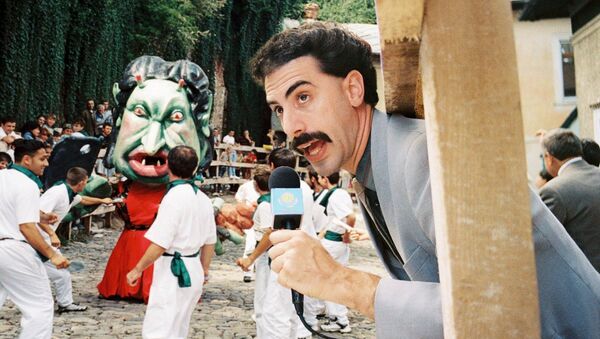 The second installment of the infamous Borat movies, which documents and satirises culture and politics in the United States, become the subject of criticism by leading members of the Trump administration after the president's lawyer was caught seemingly with his hands down his pants following a fake interview.

'I don’t want to egotistically imply that people would watch Borat and not vote for Trump, but that was the aim,' Baron Cohen said in an interview with Variety magazine on Wednesday.

Being released in October, just a month before the presidential election, the movie shows him crashing the Conservative Political Action Conference, conducted a false interview with Trump's lawyer Giuliani, and attending anti-lockdown protests with QAnon conspiracy theorists,

The lawyer, who was unaware that the interview was fake, is flirted with by Tutar throughout the interview before he lays on his bed and reaches his hand down his pants.

Baron Cohen told Variety that he feels "happy that every time his name is mentioned as he tries to undermine the election, people are reminded that this is the guy with his hand down his underpants", in reference to the scene.

He claims that scene almost didn't happen as the former New York City Mayor refused to take a rapid test before it could take place, in violation of the safety laws Baron Cohen and his producers put in place to shoot during the ongoing pandemic.

"There was this debate of what do we do? Do we go ahead with this scene? What happens if he has coronavirus? We concluded that it was worth the risk", the comedian said.

​After the scene went viral, Giuliani said that it shows him tucking in his shirt instead of any attempts to carry out any insidious acts. While the Borat cast claims that he had no idea he was being set up.

​"The movie is out, and everybody can see it the way they want to see it", said Bakalova, who was hosting the fake interview.

"I felt like he would not do that with a man, and I should be seen as a woman and not as a sexual object", she added.

While under threat of not being made due to the coronavirus pandemic, Baron Cohen said it only made the film's release all the more imperative.

"I felt democracy was in peril, I felt people’s lives were in peril and I felt compelled to finish the movie. The movie was originally about the danger of Trump and Trumpism. What coronavirus demonstrated was that there’s a lethal effect to his spreading of lies and conspiracy theories", he added. added.

​He also said that this movie would likely be the last time he would play the character on the big screen and admitted that he first planned to drop the costume entirely following the release of 'Bruno' in 2019, where he plays a flamboyant gay man maneuvering through the social spheres of armed homophobic hunters, Republican politicians, and the Westboro Baptist Church.

Baron Cohen's works are often commentaries on US culture, with particular reference to political polarisation. The first Borat film was released in 2006 at the middle of the second George Bush term, documentary fear of Muslims, attitudes towards the Iraq war, and rising nationalism.