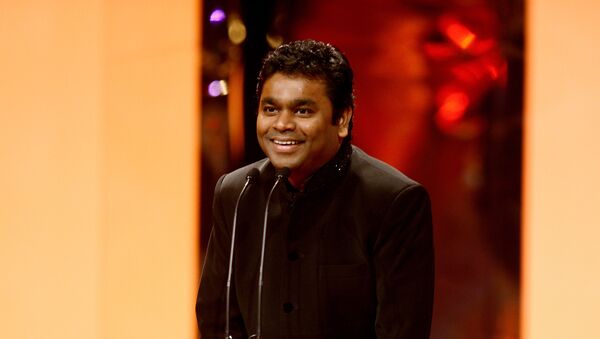 Sangeeta Yadav
All materialsWrite to the author
Oscar and Grammy-winning singer/composer AR Rahman has touched the hearts of millions around the globe with his soulful music and inspiring journey from being a school drop-out to becoming a famous musician. The singer has composed music for Hollywood blockbusters such as 127 Hours, Lord Of War and Slumdog Millionaire.

Fans can’t contain their excitement as their favourite singer and composing legend Allarakha Rahman turns 54 today. Many of his admirers have taken to social media to remember some of his much-loved songs.

When his father died in 1976 aged only 43, the nine-year-old Rahman dropped out of school to support his family and pursue music full time.

While still a child, he shot to fame for being able to play four keyboards at once after appearing on Doordarshan television's Wonder Balloon show.

His incredible talent resulted in his landing a scholarship to study at Trinity College, Oxford, where he received a degree in western classical music.

The singer came into the spotlight in 2002 with his big debut as a composer in director Mani Ratnam’s Tamil film Roja (2002). Time magazine rated Roja's soundtrack as being in the Top 10 of their all-time best film soundtracks.

Happy Birthday @arrahman
Sir. Thank you for the soulful music.
I have grown up listening to your music from recording cassettes, original cassettes, original CD's to downloads. Wish you strength and peace 💙
For me Roja album never gets old#HBDARRahmanhttps://t.co/tm7UoZBc7X

He got everyone grooving along to his masterful foot-tapping tunes such as ‘Humma Humma’ in the film Bombay, ‘Urvashi’ from Kadhalan or ‘Muqabala Muqabala' from Humse Hai Muqabala.

British newspaper, The Guardian, included the Bombay soundtrack in its '1000 albums to listen before you die'.

Born to a Hindu family on 6 January 1967 in South of India’s Chennai City, Rahman’s real name was Dileep Kumar. At the age of 23, Rahman embraced Islam after he met his spiritual guru Qadri Islam.

Some of his hit soulful Sufi songs include ‘Piya Haji Ali from the film Fiza, ‘Arziyan’ from Delhi 6, ‘Khwaja Mere Khwaja’ from Jodhaa Akbar, and ‘Kun Faya Kun’ from Rockstar (pictured below).

Record-breaking song of all time

But Rahman's ‘Jai Ho’ song from the film Slumdog Millionaire (2008) became a super hit worldwide, bagging him not only Oscars (Academy awards for Best Original Song and Best Original Score) but also Grammy and BAFTA awards.

Not many know that 'Jai Ho' was initially composed for Bollywood superstar Salman Khan when starring in the film Yuvvraaj.

The world is ruled by music
The music is ruled by ARR ❤️#HBDArRahman#HappyBirthdayARRahman pic.twitter.com/CB5V8kE1yY

And many have fallen in love with his romantic melodies which struck a chord in the heart of many couples, enhancing romantic charm and chemistry.

His romantic hits include ‘Tu Hi Re’ from Bombay, ‘Tum Ho Paas Mere’ from Rockstar, ‘Tere Bina’ from Guru, ‘Chupke Se’ from Saathiya and ‘Agar Tum Saath Ho’ from Tamasha.

​Touchingly, his son Ameen shares his birthday so the family is always able to enjoy a double celebration.

Rahman's mother, to whom he attributes his monumental success in life, recently died. He is married to Saira Banu and all of his three children – Ameen, Khatija, and Rahima – are following in his footsteps and trying to make a name for themselves in the Indian music industry.