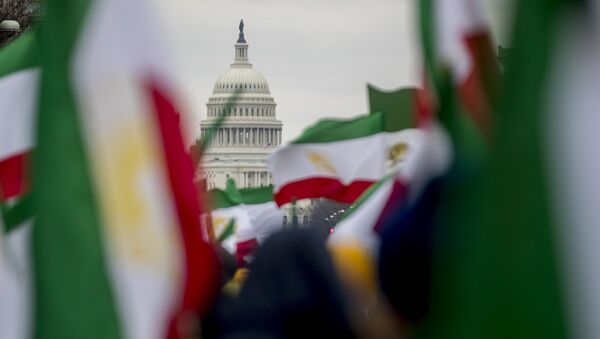 © AP Photo / Andrew Harnik
Subscribe
International
India
Africa
Ilya Tsukanov
All materialsWrite to the author
This past Sunday marked the one year anniversary of the US drone strike assassination of Iranian commander Qasem Soleimani in Baghdad. On Tuesday, US media reported that an unknown actor sent a message to air traffic controllers in New York threatening to fly a plane into the US Capitol building in Washington, ostensibly to “avenge” the general.

Revolutionary Guard Quds Force Commander Esmail Ghaani, the officer who replaced Soleimani after he was killed in a US drone strike on 3 January 2020, has warned that Iran’s American adversaries cannot avoid revenge, even on home soil.

“You cannot relax anymore even at your home, and it is not unlikely that we will take revenge inside the house,” Ghaani said, speaking at a conference in Kerman, southeastern Iran, commemorating the slain Quds commander on Wednesday – his remarks cited by Tasnim.

“They cannot assassinate our hero and live in comfort afterwards,” Ghaani added.

The commander went on to say that the United States has already faced multiple “slaps” by Iran’s hands, first by the scale of Soleimani’s funeral, and secondly by the Iranian ballistic missile attack on a pair of US bases in Iraq, which left over 100 troops with traumatic brain injuries on 8 January 2020. The next “slap” will be Washington’s “withdrawal of arrogance from the region,” Ghaani insisted.

Ghaani accompanied his remarks with a series of provocative tweets, with one featuring a gruesome photo of Donald Trump hanging from a noose outside the White House, with a portrait of Soleimani spray-painted on the wall.

“We have said it before and we say it now: Your failure and revenge have begun,” he wrote.

In another tweet, Ghaani suggested that “Students of the Shahid Soleimani School will first crush the Americans’ bones and then kick them out of the region,” and blasted Trump and Secretary of State Mike Pompeo for killing an Iranian “hero of the fight against terrorism in our region.”

This is the second time in less than a week that Ghaani has issued warnings to US officials. Last week, he hinted that actors inside the United States may independently “respond” to Soleimani’s killing, without elaborating.

In a related development, Iranian military officials have blasted the “terrorist and criminal” US military over its recent buildup in the region, and warned that the armed forces “have fingers on the trigger” to respond to any provocation.

'Soleimani Will Be Avenged': FBI Investigating Alleged Threat of Attack on Capitol Building
On 3 January, the US reversed plans to withdraw the USS Nimitz-led carrier strike group from the Middle East, citing alleged Iranian threats against Trump and other US officials. Along with the carrier group, the US has demonstratively deployed a missile submarine with over 100 Tomahawks onboard in the Persian Gulf, and flown B-52 strategic bombers into the region as a show of strength.

On Tuesday, US media reported that air traffic controllers in New York had picked up a message by an unknown group threatening to fly a plane into the US Capitol building in Washington on Wednesday. Sources told media that the threat does not appear to be credible. The FBI is investigating the incident, which is being treated as a breach of aviation frequencies.

The audio threat is reminiscent of a 2008 incident when a man, initially believed to be affiliated with the Iranian military, threatened to blow up US warships in the Persian Gulf. That incident was later blamed on a radio "prankster" unaffiliated with Iran.

Iran has repeatedly promised to exact further “revenge” against the US over Soleimani, but has ruled out attacks on civilians – including American diplomatic facilities abroad, and has never threatened the US with terrorist attacks. None of the 9/11 hijackers who flew planes into the World Trade Centre and the Pentagon were Iranian nationals. During his 20-year tenure as commander of the Quds Force, Soleimani actively battled with Islamist extremists ranging from the Taliban* and al-Qaeda* to Daesh (ISIS)* and other groups in Afghanistan, Syria, and Iraq, occasionally even indirectly cooperating with the US.

In his final years, Soleimani repeatedly accused Washington of collaborating with Daesh, once saying he would like Iranian diplomats to “slap” the West “in the face” with documents allegedly proving these claims at the United Nations.

Iranian officials have stepped up their efforts to hold the US officials they believe are responsible for Soleimani’s death, carrying out a detailed investigation into the incident implicating a host of persons, countries, companies, and organisations. On Tuesday, Iran repeated its request to Interpol urging it to approve an international arrest warrant for Trump and dozens of other US officials. Interpol dismissed a similar request in June, citing its "political" nature.