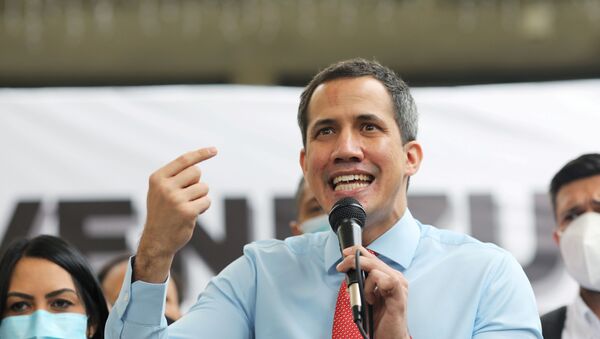 © REUTERS / MANAURE QUINTERO
Subscribe
International
India
Africa
Since 2019, the United States and the European Union have formally recognised former National Assembly leader Juan Guaido as the acting president of Venezuela. However, with the government of Nicolas Maduro holding onto power and sweeping the legislative body's elections last month, support for Guiado from the western powers is waning.

The European Union has stopped referring to the Venezuelan opposition figure Juan Guaido as the country's "acting president" after his National Assembly leadership mandate expired on Tuesday.

"Venezuela urgently needs a political solution to end the current impasse through an inclusive process of dialogue and negotiation leading to credible, inclusive, and democratic processes," said Josep Borrell, High Representative of the European Union for Foreign Affairs and Security Policy on Wednesday.

He added that the EU will maintain communications with all actors in Venezuela's political and social sphere, including "Juan Guaido and other representatives of the outgoing National Assembly elected in 2015".

Colombia and other Latin American countries pledged on Tuesday that they will continue to recognise the old National Assembly, which was voted out in the December election.

Although 277 representatives were elected to the new National Assembly, which is set to serve a term until 2026, opposition groups supported by the United States said they will continue to work as "lawmakers" for another year.

The European Union recognised Juan Guaido as president of Venezuela in January 2019, prompted by calls from Washington to declare the former National Assembly leader Nicolas Maduro's replacement as head of state.

Ceasing to refer to Guaido as president comes amid a change of guard in Washington: the outgoing Trump Administration had put pressure on the international community to replace Maduro but this attempt ended in failure.

Conversely, President-elect Joe Biden said in December that he would be willing to "negotiate" with Maduro to put an end to the ongoing political and economic crisis and confirmed he will not demand the socialist leader's resignation as a precondition to ending US sanctions.