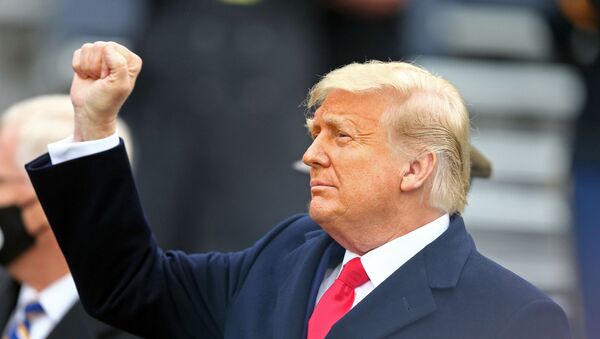 The snippets of the leaked conversation with the Georgia officials suggested that President Trump was urging them to recalculate the state's election results and "find" votes to overturn the election, something branded as "far worse than Watergate" by American investigative journalist Carl Bernstein and denounced as "a bold abuse of power" by Vice President-elect Kamala Harris.

Newsmax, however, argues that the full transcript shows the president described a string of alleged irregularities, concluding that the "honest account of ballots" would give him more than 11,000 votes, well exceeding Joe Biden's margin of victory. The Georgia officials rejected Trump's reasoning, insisting that he did not win the state.

'All Trump Did in His Call Was Express Anger'

"Trump does not say anything in those tapes that he hasn't insinuated out loud or over Twitter", notes Anthony Angelini, a Republican political consultant. "And Kamala Harris will feign righteous indignation as she does. Of course, her constant pearl-clutching over Trump's words seems more and more like Captain Louis Renault from Casablanca saying he's, 'shocked, shocked, that gambling is going on here!'"

"As for Carl Bernstein, he has made an entire career by saying things are "worse than Watergate", Angelini remarks, adding that the journalist's commentary "is useless and falls on deaf ears these days".

Take a shot every time Carl Bernstein says that something is worse than Watergate pic.twitter.com/BR8VKTBmE8

​"If Republicans had a nickel for every time liberals claimed Trump's actions were 'worse than Watergate', we'd be rich beyond our wildest dreams", echoes Dr Nicholas Waddy, associate professor of history at SUNY Alfred.

All President Trump did in his call with Brad Raffensperger was express his anger, something that most Republicans and many Americans share, according to Waddy. He underscores that the rate of ballot rejection in Georgia from 2016 to 2020 inexplicably "collapsed from 6.4% to way less than 1%", suggesting that "this year's election was manipulated to increase Biden's chances of victory" and that "Trump has every right to be upset about that".

"They published 4 minutes and 31 seconds - where is the other 35 minutes? @GaSecofState Raffensperger is a political hack who doesn't care about election integrity, nor does he care about telling the entire story. Release the full tape!" - Jason Miller, Trump 2020 Senior Adviser

​There are probably not one, but various reasons why President Trump spoke with the Georgia secretary of state and his lawyer about recalculating the election results, believes Anthony Robert Pahnke, professor of international relations at San Francisco State University.

"For one, he wants to stay relevant, and remain in the public eye", he suggests. "His recent actions, more than likely, show that he is not going away and will try to run again in 2024. He will try to make a comeback, making the claim that he and the American people had been robbed. Another, perhaps, related reason is that Trump likes the power of the presidency and doesn't want to give that up".

During the phone conversation with the Georgia officials, also joined by White House Chief of Staff Mark Meadows and Trump campaign lawyer Cleta Mitchell, the president listed instances of suspected election irregularities including dead people voting, duplicate voting, Trump ballots being thrown out, which were countered by Raffensperger as either inaccurate or have been investigated and found not true.

Following the phone call the president tweeted that Raffensperger "was unwilling, or unable, to answer questions such as the 'ballots under table' scam, ballot destruction, out of state 'voters', dead voters, and more". In response, the Georgia secretary of state wrote that what Trump said was "not true", adding that "the truth will come out".

Shafer added that the audio released by The Washington Post was "heavily edited" and omitted "the stipulation that all discussions were for the purpose of settling litigation and confidential under federal and state law".

Although the legality of the leak raises questions, none of Big Tech's social platforms has flagged or banned the media claims surrounding the president's phone call. Previously, Twitter and Facebook substantially limited the circulation of the New York Post's exposé concerning a laptop allegedly belonging to Hunter Biden, Joe Biden's son. Explaining its decision, Twitter suggested that the information obtained from the hardware could have been acquired through hacking or other illicit means.

"One assumes the conversation was leaked by someone in the White House or in Raffensperger's office who hates Trump and who wants to help Democrats win the Senate runoffs tomorrow", Nicholas Waddy presumes. "The legalities are complicated, but leaks harming Trump have almost never been punished, and the media's ethical concerns about leaked and hacked material always magically disappear when they have an opportunity to smear President Trump. That we know for sure".

President Trump should be "incensed" that once again leaked information was automatically used against him by the press and on social media, "while discussion of Hunter Biden's laptop was banned and suppressed at a critical moment in the election cycle", according to the professor.

"The double standard has never been more obvious", opines Anthony Angelini. "Here you have a nothing-burger cooked up and served to the entire social media universe on a silver platter when only weeks before you had a serious and potentially election-altering controversy swept under the rug and shadow-banned. They just don't care anymore".

Meanwhile, two Democratic House lawmakers, Ted Lieu (D-Calif.) and Kathleen Rice (D-N.Y.), have requested the FBI to open a criminal investigation into Donald Trump's call with Georgia's secretary of state, saying they believe the president "engaged in solicitation of, or conspiracy to commit, a number of election crimes".

Still, it appears that Trump's row with Raffensperger is not a burning issue as there are only 15 days left until Inauguration Day, according to Angelini.

"Who cares what Trump yells at the Georgia secretary of state?", he asks rhetorically. "Trump and Raffensburger have both made up their minds. The real question is going to be the incoming showdown in Congress. The vote recounts, lawsuits, and appeals are over. Even Trump's team is saying that. The last stand will be in Congress".