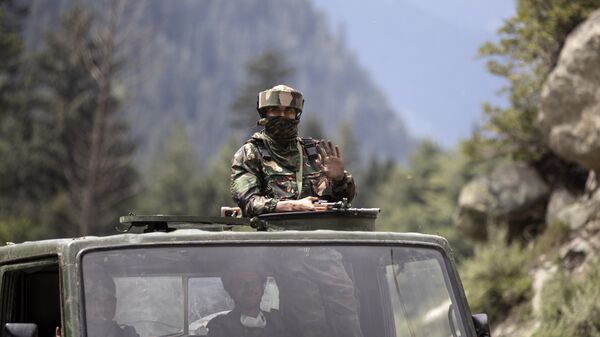 Rishikesh Kumar
All materialsWrite to the author
A Chinese professor caused a huge controversy in November 2020 as he claimed on a TV programme that Beijing had used directed energy weapons (lasers) during the skirmishes with the Indian army at the Ladakh border. The two countries have been involved in a major border stand-off since April 2020.

The Indian defence ministry has said that Indian troops have faced “unorthodox weapons” during their clash with the People’s Liberation Army in the eastern Ladakh last year.

“The Indian Army has maintained all protocols and agreements between the two countries while the PLA escalated the situation by using unorthodox weapons and amassing a large number of troops,” the Indian defence ministry document says.

The ministry, however, did not include mention of the term microwave weapons which Jin Canrong, Deputy Dean of the School of International Relations of China's Renmin University, had referred to during a television programme in November last year. Jin said the Chinese military “made innovative use of high-power microwave weapons” to attack Indian soldiers in possession of the higher positions at Pangong Tso.— Jennifer Zeng 曾錚 (@jenniferatntd) November 15, 2020

Jin claimed China had used the weapons in August to recapture strategically important heights in the Chushul sector, which provide a view to Spanggur Gap and the Chinese garrison at Moldo. The professor said China recaptured the heights after turning the hilltops into a “microwave oven”.

The Indian defence ministry's year-end review for 2020 mentions unilateral and provocative actions by the Chinese to change the status quo by force in more than one area on the Line of Actual Control (LAC). However, the ministry claimed that troops are prepared to respond firmly to the PLA to “ensure the sanctity of our claims in eastern Ladakh”.

“Braving inclement weather, our own troops continue to be deployed on these heights. Advance Winter Stocks (AWS) and winter preparations for the enhanced strength has been completed and troops are well entrenched to counter any misadventure by Chinese forces,” it said.

It is worth mentioning that the People's Liberation Army (PLA) used nail-embedded sticks as well as iron rods with machete-like heads during physical fights in the Galwan Valley on 15 to 16 June.

“In a major skirmish in Galwan, 20 brave Indian soldiers lost their life while preventing PLA troops from entering our territory. The Chinese also suffered significant casualties,” the ministry said.

Microwave weapons use a focused beam of high-frequency electromagnetic radiation to heat the water in a person’s skin. China had made its microwave weapon Poly WB-1 public in 2014 during an air show.

India and China are engaged in military and diplomatic level negotiations to defuse tensions in the eastern Ladakh after the two countries accused each other of crossing the loosely drawn Line of Actual Control.