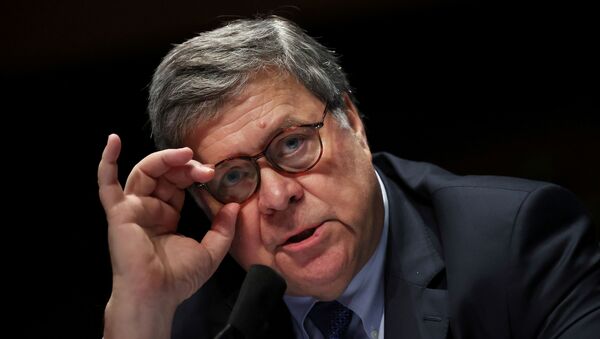 Former Attorney General William Barr personally questioned the last inmate who had shared a cell with Jeffrey Epstein before the disgraced billionaire financier was found dead in a Manhattan jail, the New York Daily News reported citing a source.

After the death ruled to be a suicide by hanging, investigators reportedly focused their attention on Efrain "Stone" Reyes, who had been transferred out of their joint cell at the Metropolitan Correctional Centre the day before Epstein took his life.

Reyes' niece and other sources previously shared with the NY Daily News that Reyes was relocated to the privately-run Queens Detention Centre, where cooperating witnesses are held.

'Barr Was a Good Guy'

After the convicted paedophile's suicide, Reyes was often pulled from the jail for frequent meetings with the authorities, a source recounted. Following one of the meetings, Reyes told the source that the attorney general himself had asked questions about the staff at MCC.

"Barr wanted to know about what was going on in there. Barr told him, 'I owe you a favour, thank you for telling us the truth'", said the source, who reportedly developed a close friendly relationship with Reyes while they were both held at the Queens jail. According to the person, Reyes had a favourable impression of Barr:

"He said (Barr) was a good guy. Barr was nice about it. He just wanted to know if (inmates) were being mistreated. What (Reyes) believed happened. Just basically that. He told them everything. He cooperated with Barr", the source summed up.

A Justice Department spokesman declined to comment. However, according to an attorney for one of the MCC officers, who recently pleaded not guilty to sleeping on the job on the night of Epstein's suicide, he wouldn't be surprised if Barr personally questioned Reyes, given how poorly the case was handled by the Justice Department.

Just weeks after Epstein's death The New York Times reported that Barr, who said the suicide made him "livid", was personally overseeing at least four inquiries into the case.

The New York Daily News exclusive only identified Reyes as Epstein's final cellmate last month, when the 51-year-old died at his mother's Bronx apartment, having previously contracted the coronavirus at the Queens Detention Centre before his release.

Epstein 'Paid for Stuff' to Keep His Cellmate 'Occupied'

The aforementioned source, his fellow inmate, sought to dispel swirling conspiracy theories that Reyes' death had something to do with the Epstein case, stressing that he had tried to help investigators.

"With Stone, he would constantly say, 'I don't feel the same, I don't feel right, I don't move the right way no more'", the source said. "You see people saying conspiracy things. No — he got COVID. He was having lung issues. He would cough all the time".

The source also recalled Reyes, a drug dealer from the Bronx, depicting how he and Epstein managed to overcome their differences when sharing one cell: for instance, while Reyes struggled to sleep early due to drug addiction, the financier ostensibly preferred to be asleep by 10 p.m.

According to the man, Epstein was there to help, supplying Reyes with drugs that cost $500 a pop – allegedly Suboxone - to put him to sleep, while MCC has long had a reputation of being targeted by smugglers.

The financier, who was previously convicted in 2008 for soliciting a child for prostitution and served 13 months in prison, was found hanging from a cloth attached to a bed frame in his prison cell on 10 August 2019. At the time, he was awaiting trial on new charges brought against him – of setting up a child sex trafficking network, which allegedly saw dozens of underage girls manipulated and sexually abused.

The case cast a shadow over the lives of quite a few people, mostly rich and famous, who Epstein was known to rub shoulders with, including his suspected associate and former partner Ghislaine Maxwell, Bill Clinton, Britain's Prince Andrew, etc.