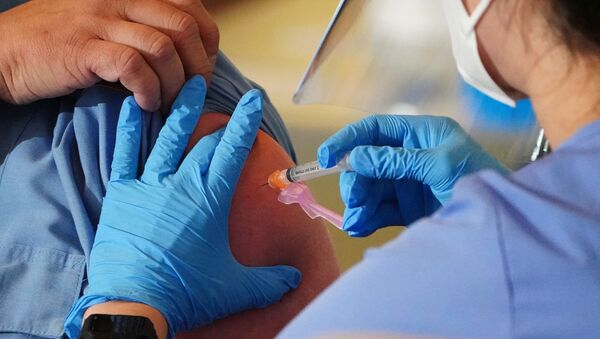 Tim Korso
All materials
The Moderna vaccine was officially registered in the US in November 2020 alongside a shot from Pfizer. However, the country still fell short of reaching an ambitious goal of inoculating 20 million people by the end of last year having only managed to give the jabs to a little more than 4 million citizens.

US citizens might be receiving only half of the dose of coronavirus vaccine developed by Moderna in the future, according to Moncef Slaoui, chief of the Operation Warp Speed, a programme introduced by Trump to develop and deliver the COVID-19 vaccines to the population quickly. He explained that the government is discussing such an option with the Food and Drug Administration (FDA) and the drug's producer, Moderna, in order to extend and accelerate the inoculation campaign in the country.

Moderna vaccine requires two jabs at a certain interval, but Slaoui suggests that only half the regular dose can be given to patients.

"We know that for the Moderna vaccine, giving half the dose to people between the ages of 18 and 55, which means exactly achieving the objective of immunising double the number of people with the doses we have," Slaoui said.

According to the Operation Warp Speed boss, half a dose of the Moderna jab "induces an identical immune response" to the full dosage in people of this age group. He did not elaborate on what information such conclusion is based except for saying that the effectiveness of this approach versus making a single shot is "based on facts and data". It is unclear if some research into the matter has already been conducted.

Moderna and the FDA have not yet commented on the Slaoui's suggestion.

US Coronavirus Vaccination Campaign Lags Behind on Set Objectives

As of 2 January over 4,225,000 people in the US already received their first shot of either of the two coronavirus vaccines registered in the country – developed by Pfizer and Moderna. A total of more than 13 million doses, each sufficient to make one of two required shots, have been shipped across the country. Still, the US has fallen considerably short of meeting a self-imposed goal of inoculating 20 million people by the end of 2020.

World
WHO Announces Validation of Pfizer-BioNTech Vaccine for Emergency Use

The companies producing the vaccine are struggling to speed up the production of the drug which is being looked on as the way to end the pandemic. However, media reports and statements of several states' authorities suggest that a lack of jabs is not the only problem the vaccination campaign faces. According to some media estimates, up to 50 percent of the healthcare workers - those most exposed to the risk of contracting COVID-19 - are refusing to take the vaccine for various reasons, from concerns over whether the drug is safe after being produced so quickly to the simple hope of avoiding complications or infection without the inoculation.