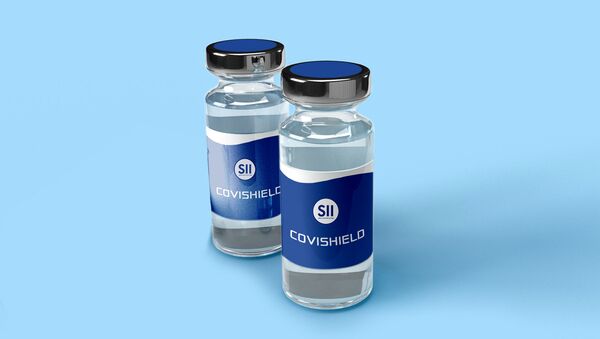 Rishikesh Kumar
All materialsWrite to the author
Undeterred by criticism, Prime Minister Narendra Modi announced that India is on the threshold of starting the largest vaccination drive in the world. As the government granted emergency approval to two of the candidates, Oxford-AstraZeneca and Covaxin, experts have questioned the efficacy of the inoculations.

The two vaccines that the Indian drug regulator has approved for restricted emergency use against the coronavirus have raised eyebrows in India amid a lack of data regarding the efficacy of the inoculations.

One of the vaccines, Oxford-AstraZeneca's jab, known as Covishield in India, is being produced locally by the Serum Institute of India. Interim results published by Oxford-AstraZeneca researchers in the United Kingdom showed only 62 percent efficacy among those given two doses. The Indian drug regulator DGCI claimed that the Serum Institute had conducted Phase 2 and 3 trials on 1,600 participants in the country, and the data was found to be “comparable” with the data from overseas studies.

“There are other countries, especially the UK, which have gone ahead with it… But it is ideal to generate local data, so they are doing a little bit of that. But it is not providing you enough for efficacy number. So obviously you need to follow data at mass level”, Dr Anant Bhan, adjunct professor and researcher in bioethics at Mangaluru’s Yenepoya University, told Sputnik while questioning the fast-track approval by the Indian drug regulator.

The second vaccine, India’s homegrown Covaxin, has released Phase 1 data which showed success in inducing an immune response and no serious adverse events in any of their 375 volunteers. The chief executive officer (CEO) of Covaxin's maker Bharat Biotech, Krishna Ella, said on Monday evening that the vaccine has shown less than 10% adverse reactions.

“I can assure that Covaxin is a 200 % safe vaccine, in comparison to others”, Krishna said, while adding that Covaxin Phase 3 efficacy data would be out by March this year.

One of India’s most highly regarded virologists, Professor Shahid Jameel, director of the Trivedi School of Biosciences at Ashoka University, said that data from neither trial in India is in the public domain.

“For Covishield we at least know efficacy from elsewhere. For Covaxin we don’t even know that. Where is that data? Vaccines are not drugs. They are given to healthy people. They are prevention not a treatment. Both safety and efficacy is required. The SEC is responsible for recommending and DCGI for approval. They owe it to the Indian public to let us know the basis of their confidence”, Jameel told Sputnik.

Krishna Ella, CEO Bharat Biotech, while comparing the number of vaccine publications of Pfizer versus AstraZeneca versus Bharat Biotech in a table, claimed that Oxford-AstraZeneca has given four grams of paracetamol for every subject who is vaccinated.

“That means they've suppressed adverse reactions. We haven't given it [paracetamol] to our volunteers…If Covaxin had made the ‘serendipitous’ errors Britain’s Oxford-AstraZeneca vaccine has made, the Indian drug controller would have shut down my company. Foreigners and regrettably even Indians target Indian scientists”, Krishna Ella said, while hitting out at detractors in an explosive media briefing on Monday evening.

For the mRNA vaccine, Ella said that we still don't know the long term impact of the Oxford-AstraZeneca vaccine. He said it is unlikely that the same vaccine can be used next year.

Experts also questioned the vaccine Covishield, which is set to be rolled out in India very soon.

“It will be good if the regulator clarifies. Why did it allow that kind of clinical trial design? It is the regulator which should explain. If there is question about why that kind of protocol was allowed, it will be good for the Serum Institute of India and AstraZeneca to clarify. In fact, for Serum, it will be nice to provide more details about the local trial. What was the level of data which was provided when the decision was taken? What does that data indicate? And how many people was it for? It would be better for the stakeholders to understand the basis on which regulators approved the Covaxin and Covishield for use”, Dr Anant Bhan underscored.

Meanwhile, Indian government sources told Sputnik that India is in the process of preparing the contours of a vaccine purchase agreement with the Serum Institute of India—which is the Indian partner of Britain's Oxford-AstraZeneca. Sources said that the government will procure 66 million doses to vaccinate 30 million frontline and healthcare workers at INR 200/dose ($2.7).

Indian Prime Minister Narendra Modi termed the approval of the two vaccines as a “game-changer” and a triumph for the broader agenda of the country achieving “self-reliance”.