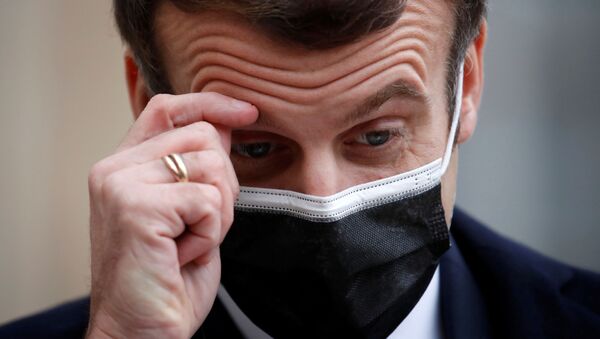 © REUTERS / GONZALO FUENTES
Subscribe
International
India
Africa
Lilia Dergacheva
All materialsWrite to the author
Addressing the nation on New Year’s Day, the French president assured no "unjustifiable delays" would occur in the nationwide coronavirus immunisation campaign, but critics argue that other EU countries are far ahead in terms of the number of those who have been vaccinated against COVID-19 in a similar time frame.

French President Emmanuel Macron has faced growing pressure to step up France's COVID-19 vaccination campaign, which has been severely lagging behind, as compared to neighbouring Germany, French television reported.

In the country, just a few hundred people have so far been inoculated against the novel virus, with the French leader reportedly infuriated at the extremely slow pace of the vaccine rollout.

A pace resembling "a family stroll" was not "worthy of the moment nor of the French", the Journal du Dimanche newspaper, which is seen as close to the Elysee Palace, quoted Macron as saying.

"I am at war in the morning, noon, evening and night", Macron, who recently battled with COVID-19 himself, reportedly said.

"I expect the same commitment from all. This won't do. It must change quickly and firmly", the president went on, having pledged in his New Year address to the nation that there would be no "unjustifiable delays" with regard to the vaccination.

The Elysee said the president would host a meeting later on Monday with officials, including Prime Minister Jean Castex, to discuss the vaccine launch.

Just over 500 people have so far received the jab in France, with critics pointing to the figure of the 200,000 people who have been inoculated in Germany in almost the same time frame, after the EU started the process a week ago. Meanwhile, according to an opinion poll by Ipsos Global Advisor - a joint venture with the World Economic Forum last week - just 40 percent of French want to take the vaccine, as compared to 77 percent in Britain.

"What we have seen is a government scandal", right-wing politician Jean Rottner, the head of France's eastern Grand Est region, which has seen a particularly sharp rise in infections, told France 2 television, stressing that "things need to accelerate".

"The French need clarity and firm messages from a government that knows where it is going. It is not giving this impression", Rottner charged.

The EU has so far greenlit only the Pfizer-BioNTech vaccine, while a jab locally developed by France's Sanofi and Britain's GSK will only be released later in 2021, due to multiple delays. Prominent French Green politician Yannick Jadot even referred to the French vaccine limbo as the country’s “industrial fiasco”.

Nonetheless, it goes without saying that the skyrocketing number of infections around the world means that the race to vaccinate is set to dominate the year.

Addressing the threat of a new wave of COVID-19 infections, the French government has now lengthened an overnight curfew by two hours in separate parts of the country to help combat the virus. But during the New Year celebrations, quite a few revellers were caught flouting the measures across the country.

France has to date clocked a total of almost 2,600,000 coronavirus cases, and more than 64,500 related deaths, according to fresh WHO statistics.