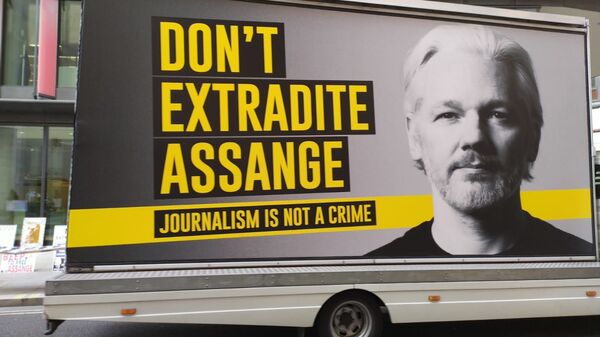 © Photo : Mohamed Elmaazi
Subscribe
International
India
Africa
Chris Summers
All materialsWrite to the author
Julian Assange's US lawyer, Barry Pollack, said he was “enormously gratified by the UK court's decision denying extradition.” District Judge Vanessa Baraitser ruled that although the extradition case was solid, the risk of suicide was too great.

There has been a huge reaction on social media to the news that a judge in London has blocked Julian Assange’s extradition to the United States over revelations which emerged on the WikiLeaks website he founded.

WikiLeaks obtained 251,287 “confidential” documents dating from 28 December 1966 to 28 February 2010 but Assange was accused of endangering the lives of US agents and informants.

​On Monday, 4 December, Assange’s mother Christine tweeted that her son had “suffered enough” and implored President Trump and President-elect Biden to order them to drop the appeal against Judge Vanessa Baraitser’s decision.

​The ruling was welcomed by Andrew Wilkie, an independent MP from Australia, who tweeted that the Australian prime minister Scott Morrison must allow him to “return home a free man”. He added: “Assange was always the hero, not the villain.”

​Diane Abbott, the Labour MP and former Shadow Home Secretary, tweeted that it was an “excellent ruling by the British judge” and added: “Congratulations to all the dogged campaigners on Assange’s behalf.”

​Glenn Greenwald, the former Guardian journalist who published stories based on leaks from Edward Snowden, pointed out that Judge Vanessa Baraitser had actually endorsed most of the US government’s points and had simply ruled against them because of the suicide risk.

​The British rapper MIA tweeted a quote from Assange and veteran journalist John Pilger described the ruling as “face-saving cover for the British to justify their disgraceful political trial of Assange on America’s behalf.”

We welcome the fact that Julian Assange will not be sent to the USA, but this does not absolve the UK from having engaged in this politically-motivated process at the behest of the USA and putting media freedom and freedom of expression on trial.