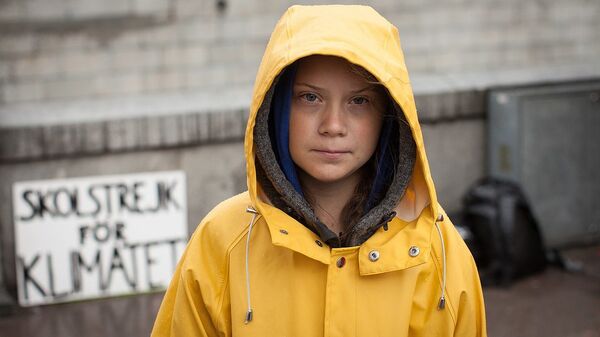 Igor Kuznetsov
All materials
Since her rise to prominence in 2018 as a 15-year-old, Thunberg has turned into a climate guru of sorts, who vocally berates world leaders, befriends celebrities-turned-ecowarriors (such as Arnold Schwarzenegger and Leonardo DiCaprio), and instructs her massive followship on how to live a sustainable life.

Thunberg, now an adult, marked the occasion with a sarcastic tweet.

After thanking her numerous "well wishers", Thunberg poked fun at the numerous conspiracy theories about herself, which have flourished since her rise to global fame in 2018 as a 15-year-old teenager.

"Tonight you will find me down at the local pub exposing all the dark secrets behind the climate- and school strike conspiracy and my evil handlers who can no longer control me! I am free at last!!", Thunberg wrote sarcastically, wearing a "Flat Mars Society" shirt.

Thank you so much for all the well-wishes on my 18th birthday!

Tonight you will find me down at the local pub exposing all the dark secrets behind the climate- and school strike conspiracy and my evil handlers who can no longer control me!
I am free at last!! pic.twitter.com/w1VBG83VVN

​Apart from congratulations, arguably the most common emotions on social media were disbelief and incredulity, encapsulated in the following tweet: "Greta is 18 already? I feel old".

i could have sworn greta thunberg was 13 just a few weeks ago. now she's 18.

​While Thunberg's rise to prominence was meteoric and her fame international, many critics were sceptical about the authenticity of her character and her campaign, citing her mental issues including Asperger's and seeing her as a manipulated child. Among other things, some of her less-than-sparkling spontaneous interviews and the permanent presence of certain people in her entourage are referenced to cast further doubt about the independence of her message. Greta's sarcasm was meant to dispel these claims.

As for her supposedly hitting the local pub, the minimum drinking age in bars in Sweden is really 18, though some pubs and nightclubs might have a higher age limit for entry: 20 or even 25. However, the minimum age to buy alcoholic beverages containing over 3.5 percent alcohol is 20, and they can only be bought at Systembolaget, a state-owned chain.

Despite her tender age, Greta Thunberg has amassed an ever-growing list of trophies, prizes, and accolades and enjoyed the media's undivided attention and admiration, appearing on front pages across the globe. She was nominated for the Nobel Peace Prize twice (both were narrow misses).

What started as a solitary campaign outside the Swedish parliament, turned into an international school strike movement, with hundreds of thousands of schoolkids walking away from classes and demanding more resolute climate action from their respective governments. Thunberg herself has since become somewhat of a climate guru, who vocally berates world leaders, befriends celebrities-turned-ecowarriors, and instructs her massive followship on how to live a sustainable life. Greta herself doesn't fly and doesn't buy new clothes.

Greta's phenomenal fame overshadowing that of climate activists of the past hasn't been without controversy, as numerous critics see her as a puppet in the hands of the very same multinational companies and politicians she eagerly blasts.