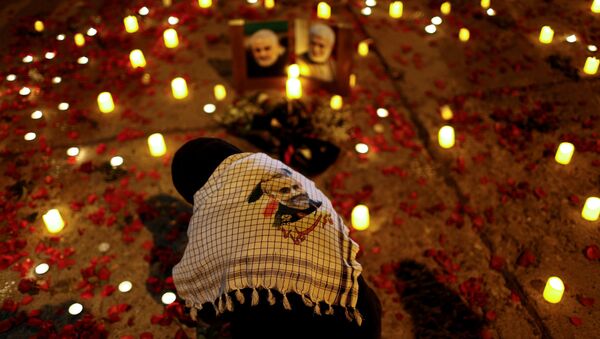 © REUTERS / THAIER AL-SUDANI
Subscribe
Daria Bedenko
All materialsWrite to the author
Top general of the Islamic Revolutionary Guard Corps (IRGC), Qasem Soleimani, was assassinated on 3 January, 2020, in a drone strike directly ordered by US President Donald Trump, as the military leader and deputy chairman of Iraq's Popular Mobilization Forces (PMF), Abu Mahdi al-Muhandis, were allegedly on the way to meet the Iraqi Prime Minister.

The vicinity of Baghdad International Airport is seeing many people paying tribute to the late Iranian top general, Qasem Soleimani, who was assassinated on the direct order of Donald Trump on 3 January 2020.

The anniversary of the murder prompted crowds of people to flock the road to Baghdad International Airport and the area around it, with pilgrims lighting candles, carrying portraits of Soleimani and, according to some videos shared on social media, chanting anti-US slogans.

Baghdad Airport Street, where the fatal drone strike took place, is seen filled with people who came there for the commemoration ceremony.

Tribute to Al Muhandis and Hajj Qassem at the location of their martyrdom on the road to Baghdad Airport 💔- Allah Yerhamhom Brave Heroes🕊 pic.twitter.com/acxjGMEWsL

Baghdad Airport Street, the site of the martyrdom of Sardar Soleimani and Abu Mahdi Al-Mohandes, has now become the site of a glorious commemoration ceremony. pic.twitter.com/IfzWq4Y6Zi

Thousands of Iraqis brave the cold to remember the night of the first anniversary of American murder of Iranian general Qassim Soleimani and Iraqi commander Abu Mahdi Al-Muhandid pic.twitter.com/9wpJhD7q2X

Currently at the scene of the explosion near Baghdad airport. #WeRemember pic.twitter.com/8D8dbsZaxw

Thousands gather at the site of American murder of Iranian General Qassim Soleimani and Iraqi commander Al-Muhandis, near Baghdad Airport in #Iraq pic.twitter.com/UVV8kfJXeP

​The footage shared online shows people putting up candles in memory of Soleimani and al-Muhandis. A group of pilgrims is also seen gathered around a circle of candles and petals.

citizens light candles at the site of the assassination of Soleimani and Al-Muhandis and their companions near Baghdad airport pic.twitter.com/IZVwzWjZPP

​The roads around Baghdad airport, according to social media videos, are stuck in traffic as people gather to pay tribute to the late general and the deputy PMF head.

Thousands of cars and coaches fill the roads around Baghdad Airport as Iraqis remember the martyrdom of Iran General Soleimani and Iraqi commander Abu Mahdi Al-Muhandis exactly one year ago pic.twitter.com/XnPYPgxsFu

​According to one of the videos, the site of the explosion has became the primary place of protest, as people can be seen waving flags and allegedly chanting anti-US slogans.

​On 3 January, 2020, Qasem Soleimani and Abu Mahdi al-Muhandis were killed by order of US President Donald Trump as they were reportedly heading from Baghdad International Airport to meet the Iraqi Prime Minister.

The strike caused an escalation of tensions between Iran and the United States, prompting a retaliatory attack from Iran targeting US military bases in Iraq with rockets.

The attack did not result in damage or casualties, but the US later said that dozens of American soldiers had been diagnosed with traumatic brain injuries.

As the anniversary of the assassination loomed, Iran repeatedly vowed to "bring those responsible to justice", continuing to condemn the extrajudicial killing by Trump as "an act of terror".

POTUS claimed that Soleimani, who he labeled "a monster", was "plotting imminent and sinister attacks on American diplomats and military personnel", but never revealed any evidence to back his strident claims.