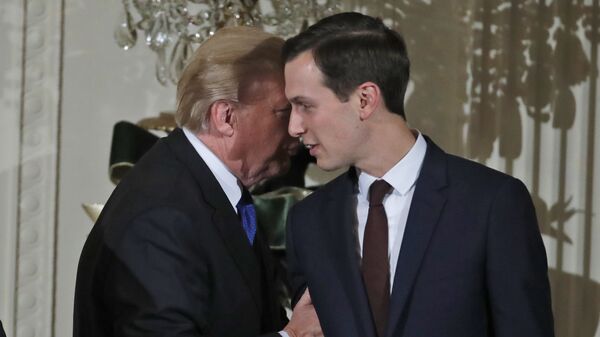 Daria Bedenko
All materialsWrite to the author
Touting his administration's coronavirus pandemic response, outgoing US President Donald Trump has been particularly praising the amount of COVID-19 tests performed in the United States, claiming: "we test more than anybody".

Donald Trump pointed a finger at his son-in-law and senior adviser, Jared Kushner, stating that it "would be his fault" if the 2020 presidential election did not go well for the Trump campaign, The New York Times reported, citing a "behind-the-scenes" conversation between top aides at the Oval Office.

“You’re killing me! This whole thing is! We’ve got all the damn cases,” Trump reportedly yelled at Kushner during the August meeting at the Oval Office. “I want to do what Mexico does. They don’t give you a test till you get to the emergency room and you’re vomiting.”

The reported meeting took place on 19 August, and apparently Trump became furious after his primary pollster, Tony Fabrizio, reported that mask wearing was acceptable "even among Mr. Trump’s supporters".

Fabrizio's observation was reportedly supported by Kushner, who called embracing mask-wearing a "no-brainer", arguing that masks could be presented as a way to regain freedom to attend sporting events, restaurants or other public places.

The White House chief of staff, Mark Meadows, objected, however, saying that "the base will revolt". Meadows' word appeared to be decisive, according to the report, as Trump then said that he was "not doing a mask mandate".

“I’m going to lose,” Trump told Kushner during debate preparations. “And it’s going to be your fault, because of the testing.”

According to The NYT, Trump was also convinced that top government health officials, scientists and doctors were conspiring to prevent him from winning after the president was given to understand that "it would be days before the government could give emergency approval to the use of convalescent plasma as a treatment".

“They’re Democrats! They’re against me!” Trump is reported to have exclaimed. “They want to wait!”

Trump has been reluctant to wear mask - he was only seen with his face covered after being diagnosed with COVID-19 back in October.

The outcome of the presidential election saw him lose to Democratic candidate Joe Biden, both in the popular and in the Electoral College vote. Biden has been a vocal advocate of mask wearing, noting that he would ask Americans to wear masks during the first 100 days of his presidency.

The United States tops those nations worst affected by the coronavirus pandemic, with over 19 million cases registered across the country and over 345,000 related deaths.