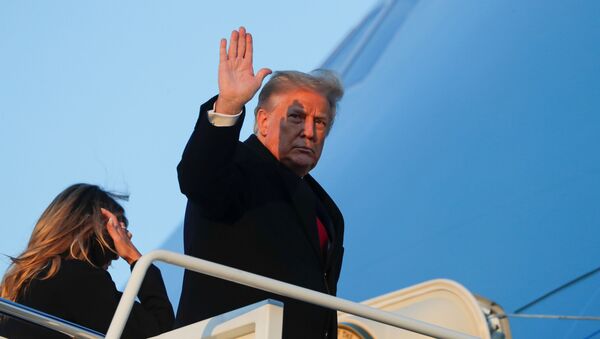 © REUTERS / TOM BRENNER
Subscribe
Daria Bedenko
All materialsWrite to the author
Sitting president Donald Trump has refused to concede to Joe Biden, who, according to both the popular and the Electoral College vote, won the 2020 White House race. Trump continues to challenge the election outcome in courts while claiming "massive election fraud".

US President Donald Trump on Friday tweeted a "Stop the Steal" protest rally in Washington DC at 11 a.m., local time, on 6 January, the same day that a joint session in the US Congress will take place to certify the presidential election results.

It has been several weeks since Trump teased his 6 January event, tweeting on 19 December about a "big protest" upcoming in Washington DC and urging followers to "be there", adding that it "will be wild!"

The tweet in which Trump announced the rally, however, was deleted shortly after the president posted it.

After the initial tweet was removed, Trump posted an identical one several minutes later.

Announcing a protest rally on 6 January, Trump in a follow-up tweet posted that "massive amounts of evidence" will be presented on that day, doubling down on his claims that he "won, BIG!".

Massive amounts of evidence will be presented on the 6th. We won, BIG! https://t.co/ymncRrNR5t

Trump, along with several Republican allies, has been contesting the election outcome, claiming "massive election fraud" and dubbing Joe Biden, who received the majority of the popular and the Electoral College votes, "a fake president".

Vice President Mike Pence, who will be leading the joint session, has refused to join the initiative. On Thursday, Pence asked a federal judge to dismiss a motion filed by GOP Representative Louie Gohmert, in which the latter attempted to prove that Pence has the right to determine which electoral votes will be counted during the congressional review.

“Plaintiffs have presented this Court with an emergency motion raising a host of weighty legal issues about the manner in which the electoral votes for President are to be counted. But these plaintiffs' suit is not a proper vehicle for addressing those issues because plaintiffs have sued the wrong defendant”, Pence said in his response to the lawsuit.

On 14 December, 2020, the Electoral College handed Joe Biden 306 votes, with Donald Trump receiving 232. The sitting president, however, appears to remain committed to his refusal to concede, continuing to declare that the election was "rigged" and "one not even fit for third world countries".

000000
Popular comments
Baby Trump isn't happy if he isn't creating conflict, hate and keeping himself in the news, no one stole the election Trump is a spoiler loser that needs to grow up and act like an adults for a change.

Ladyshadow
1 January, 23:48 GMT1
000000
When Biden’s bid for the presidency fails his supporters will be rolling over in their graves