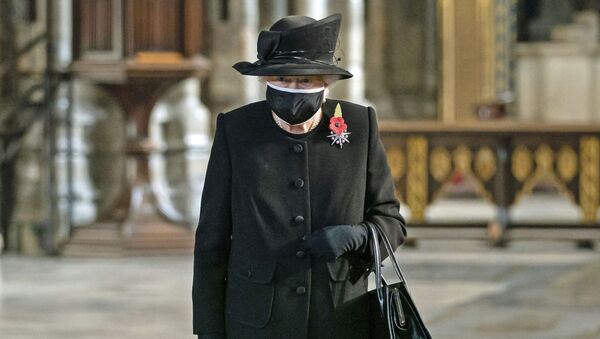 Aleksandra Serebriakova
Sputnik correspondent specializing in foreign affairs.
All materialsWrite to the author
A mass vaccination programme was unveiled in the United Kingdom in the start of December, after Britain became the first country in the world to register the Pfizer-BioNTech vaccine against coronavirus. The first batch of jabs was reserved for care home residents and the elderly, such as 94-year-old British monarch Queen Elizabeth II.

While the first Pfizer shots have started being given to Britons, Buckingham palace aides have refused to say whether the Queen Elizabeth and her 99-year-old husband Prince Philip would get the COVID vaccine, maintaining that it was their “personal decision” and a “private matter”.

The two easily fall into the category of those entitled to receive the jabs in the first wave, although a source told the Mail on Sunday in December that the royal couple would “wait in line” for injections like everybody else.

It is still not clear whether the Queen, 94, has decided to get the jab, as no official announcement on the matter was made. Back in the 1950s, the Queen was one of those who put the public at ease about the polio vaccine, after confirming that both Prince Charles and Princess Anne – aged eight and six at that time – would be vaccinated.

There is one person related to the royal family who did not stay secret about her COVID vaccination: Lady Pamela Hicks, the 91-year-old daughter of 1st Earl Louis Mountbatten, who remains one of two surviving bridesmaids of the Queen, and has now been inoculated.

Her daughter India Hicks, a second cousin and a godchild of Prince Charles, has shared the news on her Instagram, saying that her mother has agreed on the image of the procedure to be publicly shared in a “sense of hope”.

“My mother received the vaccine, from her local doctor, in the local village, all via the NHS,” India Hicks wrote. “We all need a slither of hope right now, most especially for everyone tightly locked down again in England.”

Britain became the first country in the world to greenlight the coronavirus vaccine jointly developed by American pharmaceutical giant Pfizer and German’s BioNTech. By mid-December, the UK had ordered 40 million doses of the Pfizer-BioNTech vaccine to deliver to 20 million people, with the first batch of jabs expected to be given to the UK's elderly.

In November, the companies announced that their vaccine has proven to have a 94% efficiency for adults over 65 years old, following trials that have involved around 41,000 people of different ages worldwide.