From Largest Communal Dispute to an End to Colonial Baggage: Top 10 India Events in 2020 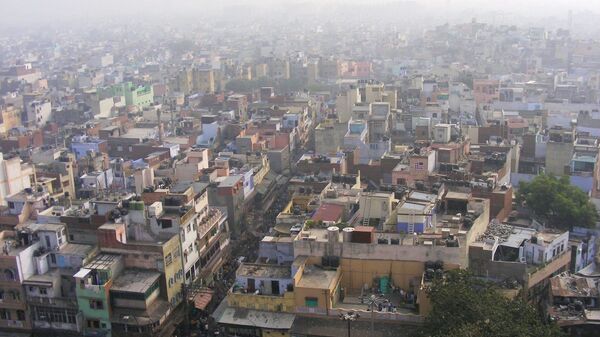 Dhairya Maheshwari
All materials
From a pandemic-induced migration crisis to a Supreme Court judgement in favour of Ram Mandir, 2020 has been an eventful year for India. Here is a recap of 10 major developments in the nation that have made the boldest headlines.

The onset of the COVID pandemic in the world's second-most populous country touched the life of every Indian. The pandemic epidemic and New Delhi's response aren't the only notable events that have shaped India's political and cultural life in 2020.

2020 will be remembered for many reasons, including a year that marked a 'turning point' in India-China relations particularly due to an ongoing border standoff.

Continuing protests by farmers and agricultural workers against three new federal laws has been another big story of the year, attracting international attention, much to the chagrin of the Narendra Modi's government.

1. Riots Against Anti-Citizenship Act in Delhi

Fifty one people were killed in communal clashes in Delhi’s northeast district between 23 and 29 February. The sectarian clashes took place between Muslims, who had been protesting a new Citizenship Amendment Act, and Hindu mobs backing the new law.

The December 2019 passage of the Citizenship Amendment Act by parliament triggered nationwide protests by Muslims, who claim that the law is a plank by the Bharatiya Janata Party government to deprive them of their Indian citizenship. 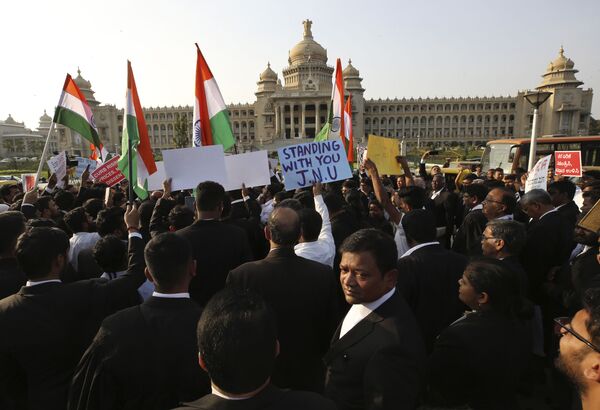 Many, including those among the Muslims of India, however, refuse to accept the government’s explanation.

The signing of three new farm-related acts into law, by President Ram Nath Kovind on 28 September, led to protests by farmers mainly from the grain-basket states of Punjab and Haryana, who demand a repeal of the new federal legislation.

Prime Minister Narendra Modi contended in several appeals to protesting farmers that the new laws would boost their income by diversifying the buyer base of their produce.

Farmers state, however, that the laws give a backdoor entry to corporations and big business into the agriculture sector and ultimately leave workers at the mercy of multinational players.

Protests against the new laws; the Farmers' Produce Trade and Commerce (Promotion and Facilitation) Act, the Farmers (Empowerment and Protection) Agreement on Price Assurance, and the Farm Services Act and Essential Commodities (Amendment) Act 2020, are ongoing at the state borders of Delhi since the acts were announced by the government. 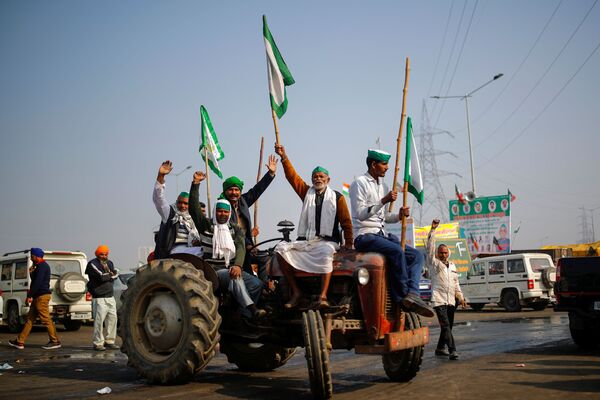 Farmers shout slogans as they sit on a tractor during a protest against farm bills passed by India's parliament, at the Delhi-Uttar Pradesh border in Ghaziabad, India, December 16, 2020
© REUTERS / ADNAN ABIDI

In the latest round of negotiations between protesting farmers and the federal government on 30 December, India’s agriculture Minister, Narendra Singh Tomar, asked for a written proposal from the protesters detailing alternatives to repealing the laws.

The farmers and agricultural workers refuse to back down, however, from demands that the new laws be completely rolled back.

The country with the second-worst COVID-19 pandemic death and infection rates in the world, India is limping back to a form of normalcy after peaking during the middle of the year. With over 10 million infections reported at the moment, including at least 148,000 deaths. 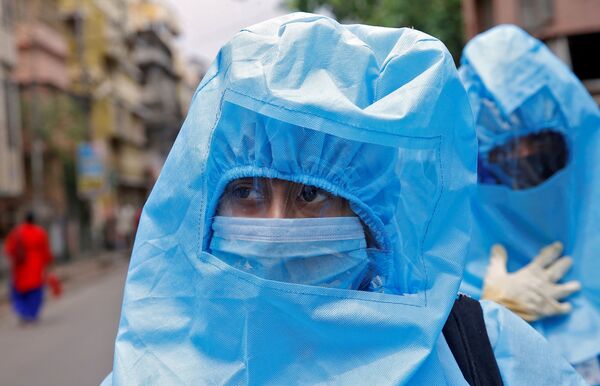 The emergence of the COVID-19 pandemic in India was met with strict measures, as authorities imposed some of the world’s strictest national lockdowns in March, April and May. Those restrictions were subsequently eased towards the latter half of the year, prior to the second global wave of the pandemic, and subsequent mutation of the virus.

The lockdown has taken its toll on the nation's economy, and has worsened unemployment.

India Tightens Rules to Implement Countrywide Lockdown Amid Mass Exodus of Migrant Workers
Hundreds of thousands of workers in India’s unorganized sector were left stranded across the nation's highways after Modi on 24 March announced a nationwide lockdown to slow the spread of COVID-19.

Migrant workers, many daily-wage earners, dotted the country’s highways making journeys on foot in hopes of reaching their home villages before lockdown restrictions cut off travel. Scenes of the barefoot poor braving the scorching summer heat to reach their home villages attracted international attention, as well as widespread criticism over a lack of empathy and logistical understanding by authorities.

Over three-quarters of the entire Indian workforce in the second-most populated country in the world works in what is referred to as the informal sector.

Indian and Chinese troops clashed at Galwan Valley in the eastern Ladakh region, on the intervening night of 15 and 16 June, an incident that led to the death of 20 Indian soldiers.

Sign of Disengagement? China, India Agree to Withdraw Troops From Forward Areas in Galwan Valley
The clash, which came in the middle of an ongoing military standoff at the disputed de-facto Line of Actual Control (LAC) border, was the deadliest between the two Asian neighbours since the border War in 1962.

The tense standoff at the remote Himalayan border began in the last week of April, after New Delhi claimed that troops from the People’s Liberation Army (PLA) intruded into territory patrolled by Indian soldiers. Multiple rounds of military commander-level negotiations have failed to resolve the standoff.

India in November reported that its gross domestic product (GDP) had contracted for the second successive quarter, between July and September, registering a year-on-year decline of 7.5 percent during the time period.

New Delhi faces a GDP contraction of 23.9 percent during the April-June quarter, the worst since records began to be kept. The two concurrent quarterly slumps have mainly been blamed on restricted economic activity because of the pandemic-induced lockdown.

A 75-member tri-service contingent from India participated in the 75th anniversary celebrations of the 1945 Russian victory in World War II. A formal invitation to the Indian delegation was extended by Russian Defence Minister General Sergei Shoigu. 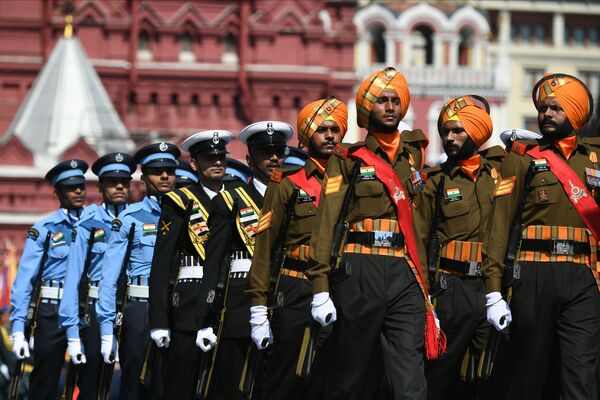 Soldiers of the Indian Armed Forces march along Red Square in Moscow during the military parade to commemorate the 75th anniversary of Victory in World War II.
© Sputnik / Ramil Sitdikov
/
Go to the mediabank

The Indian contingent’s 24 June march in the Victory Day Parade at Moscow’s Red Square was personally witnessed by Indian Defence Minister Rajnath Singh. Participation in the victory day parade is considered historic as it is claimed to now highlight “India clearly delineating historical baggage while dealing in foreign policy”.

An Air India Express aircraft repatriating stranded Indians from Dubai crashed on touching down at Kozhikode Airport in the southern Kerala state on August 7, killing nearly 18 passengers and injuring almost 100.

An investigation by India's civil aviation authorities blamed the crash on poor weather conditions as well a possible late touchdown by the pilot on the airport's table-top runway. The plane is said to have plunged 30-35 feet after overshooting the runway, according to the findings.

Prime Minister Narendra Modi led a religious ceremony to mark the beginning of construction of the Ram Temple in Ayodhya, a north Indian town that has been the site of one of the country's most bitter religious disputes between Hindus and Muslims. 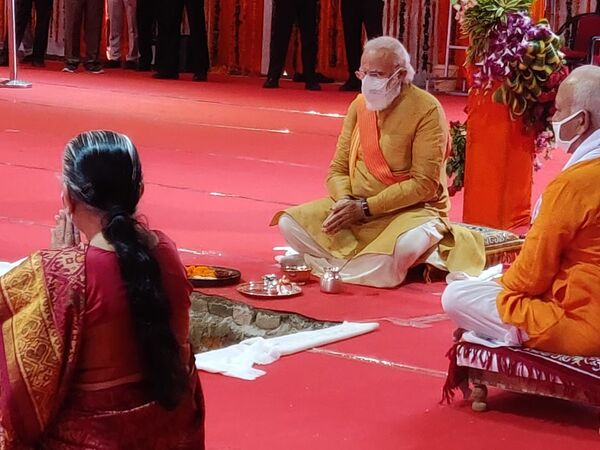 Construction began after India’s Supreme Court in November 2019 ordered the site handed over to a trust for the construction of a Hindu temple dedicated to one of the religion's deities named Ram.

The 2.7 acre plot of land in Ayodhya has long been claimed by Muslims and Hindus. In 1992, a Hindu mob razed a 15th century mosque at the site and demanded that a Hindu temple be built on the location. The religious vandalism led to an ongoing legal dispute that has spanned over two decades.

PM Modi in December 2020 formally inaugurated the construction of the country’s new federal parliament building, amid criticism from opposition lawmakers on the disputed necessity for a new structure as the economy remains troubled due to the ongoing pandemic.

The new building is projected to cost $131 million and will have increased seating capacity in both the upper and lower houses.

The new building, proposed as a triangle, will replace the existing British colonial-era structure and is expected to be completed by 2022.