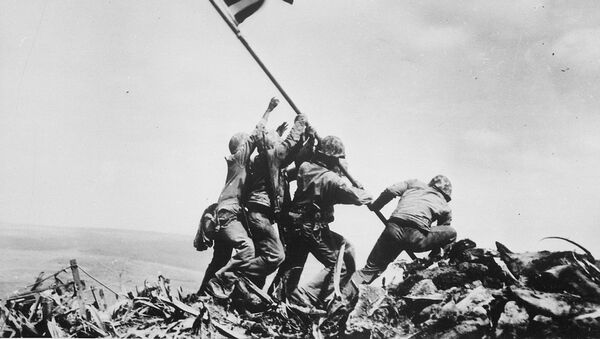 Andrei Dergalin
All materialsWrite to the author
The blogger claimed that up to 30 seconds are missing from the footage of the famous flag-raising operation.

Having previously made a number of bold claims about objects he’s allegedly spotted on maps of Earth and the surface of Mars, blogger and UFO hunter Scott C. Waring has now turned his attention to the history books, claiming that a UFO was caught on camera over Iwo Jima during World War II.

Pointing to archive footage showing the US flag being raised on the Japanese island – probably one of the most iconic moments in the history of the Pacific War – Waring argues that a dot which briefly appears in the background is actually a UFO, and that the footage gets cut just as the soldiers raising the flag allegedly acknowledge the craft's presence.

"There is 10-30 seconds missing from this historical film! Why? Because someone else also saw it and wanted to remove it from US history," he wrote in his blog. "However, they did a poor job and the cut is not only deliberate, but obvious to all who see it."

Waring also speculates that his find is proof of aliens being capable of "time travel to any place or moment in history to watch humans and study them," though he doesn't elaborate on the time angle.