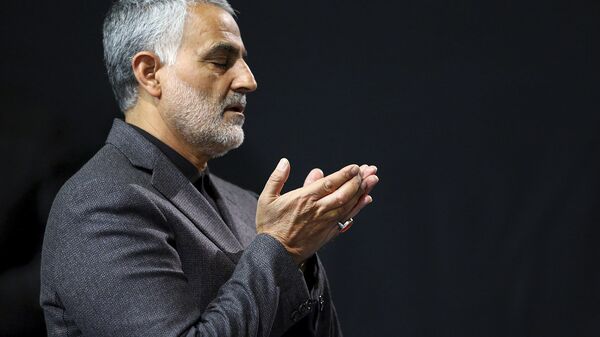 Ilya Tsukanov
All materialsWrite to the author
Sunday will mark the one year anniversary of Quds Force Commander Qasem Soleimani’s assassination in a US drone strike in Baghdad. Iran has called the missile attack it launched on US bases in Iraq days after the killing merely the “initial slap” of “revenge.”

The United States, Israel and others involved in plotting or executing the 3 January attack on Qasem Soleimani have been living in fear of Iranian reprisal for a year now, Abdolrahim Mousavi, commander in chief of the Islamic Republic’s Army, has said.

The past year has passed with Soleimani’s assassins in a constant state of “horror” due to “the hand holding a sword and a sledgehammer” that has been raised against them, Mousavi said, speaking to Iran’s Tasnim news agency.

“They know that the Islamic Republic of Iran and its Supreme Leader are serious in what they say and that they keep their promises,” the commander added, saying this had been shown to be true in the forty years since the Iranian Revolution of 1979. “That is why there is fear among them; they have been waiting for a year for the blow of revenge for Martyr Soleimani to hit them.”

Mousavi echoed comments made by other Iranian officials in saying that there was no official of equal worth in the United States or Israel who could “compensate” Iran for Soleimani in a tit-for-tat assassination. Instead, he said, other forms of compensation have been found –for instance the US’s gradual withdrawal from Iraq and the region more broadly. “This is part of the revenge we are talking about,” he said.

“Revenge on the Americans and the Zionist regime is to achieve the goal set by Soleimani. His goal was to overthrow the system of domination from the world and to accelerate the collapse of the Zionist regime,” Mousavi said.

The commander went on to praise Soleimani for his role helping to save the people of Iraq and Syria from Daesh (ISIS)*, saying that in so doing, the Quds general “reduced the evil of this danger to the Iranian people. If Daesh had set foot in our country, their savagery would be far greater than what they did in other countries,” he suggested.

Soleimani and Abu Mahdi al-Muhandis, a top Baghdad-allied Shia militia commander, were killed on 3 January 2020 after their convoy was struck by a US drone. Iran retaliated by launching over a dozen ballistic missiles at two US bases in Iraq on 8 January, with over 100 US troops injured in the strikes.

On Wednesday, a Tehran prosecutor accused UK-based security services company G4S of collaborating with US forces in the assassination. The company dismissed the allegation as "completely unfounded." The prosecutor also said that a US air base in Germany was implicated in the killing by providing crucial information and flight data.