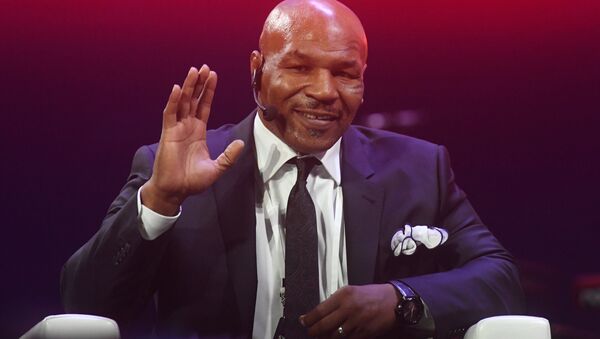 Aleksandra Serebriakova
Moscow-based Sputnik correspondent specializing in foreign affairs.
All materialsWrite to the author
'Iron Mike’ Tyson is a prominent marijuana enthusiast, who has never made his history of drug use a secret.

Boxing legend Mike Tyson took on a generous offer from the Logan Paul’s Impaulsive podcast co-host Mike Majlak, just few minutes after the show had begun, and swallowed four or five grams of magic mushroom – all while smoking a joint.

"You're really pretty objective to what's going on. Mushrooms tell you you're nothing. You look at the ground, it's moving. You look at the plants and trees, they're doing something,” Tyson revealed. "Mushrooms are going to make you beautiful and feel good and all that stuff.”

A vocal connoisseur of cannabis, Tyson then doubled down on his calls to legalise the 'shrooms which he said were making him “better”.

“It’s going to be the best thing in the 21st century”, he said about a potential legalisation of the drug Psilocybin.

He then moved on to comment on the upcoming bout between boxing star Floyd Mayweather and YouTuber Logan Paul.

Speaking in front of the Paul, he said that Mayweather was going to “‘beat his f***ing ass!”.

Tyson had retired from his professional field in 2006 but made a prominent exhibition comeback last month. In November, he returned to the ring to cross gloves with Roy Jones Jr., with the fight eventually being declared a draw after eight rounds. According to the boxer, it was the psychedelic ‘Toad Venom’ drug which had helped him to get into shape before the bout.

Logan Paul’s Impaulsive podcast was launched back in 2018 and has rocked many celebrity guests ever since. Back in July 2019, another prominent invitee, Bella Thorne, embraced Elon Musk’s iconic “smoking weed” image, lighting up a joint in the studio.