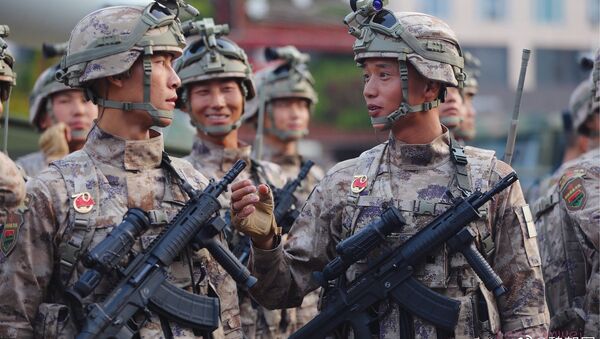 Morgan Artyukhina
All materialsWrite to the author
An updated version of China’s National Defense Law was recently adopted and will enter effect on January 1, 2021, the People’s Liberation Army (PLA) announced on Tuesday. The law reiterates the defensive nature of the Chinese military and elaborates on the roles of civilians in a national crisis.

According to a news release by the PLA’s China Military Online, a total of 54 articles were revised, six were added and three deleted, and the titles of two chapters were changed.

The changes cover seven main aspects, including affirming Xi Jinping Thought on Socialism with Chinese Characteristics for a New Era as the PLA’s guiding thought; further defining of the defense duties of different bodies in the Chinese state; the tasks and goals for the construction of the Chinese armed forces; the importance of national interests to defense policy; the enhancement of “systems of national defense education and mobilization”; the respected position of PLA personnel in Chinese society; and the policies and systems concerning relations with foreign militaries.

“The revised law further embodies the character that China's national defense is a whole-of-people cause,” China Military said.

Song Zhongping, a Chinese military expert and commentator, wrote in the Global Times on Monday that military reforms over the last decade and “profound changes” in the geopolitical situation mandate that the law be updated.

“This amendment has drawn global attention, as China's military development and strategies always arouse Western interest, particularly their media outlets,” Song added. “China always insists on a defensive policy for national security. As China gains more military might, the West is worried whether Beijing will change strategies. Additionally, following the logic that ‘a strong country is bound to seek hegemony,’ Western countries led by the US are anxious whether China will repeat their path. This is hardly the case.”

During the tenure of US President Donald Trump that is now drawing to a close, the US shifted its geostrategic posture away from the War on Terror for the first time in 19 years, preparing for what the White House called “great power competition” with Russia and China. According to Washington, China is trying to rewrite the “rules-based international order,” in which the US has dominated the world since World War II, in a bid to displace the US as world leader.

Last month, the US State Department released a white paper outlining US strategy for a decades-long struggle to stop China’s rise, a "cold war" in which the US will seek to isolate Beijing politically and diplomatically, undermine the Communist Party of China’s rule and the socialist system, and inculcate in the US population the belief that such actions are necessary.

“Such a statement is completely justified. It means that China will not take the initiative to invade any other country, nor will it engage in expansion. China is merely safeguarding its sovereignty and territory. It will not infringe upon an inch of territory that belongs to any other country,” the analyst wrote.

“However, when it comes to development interests and safeguarding China's territorial interests, we have to do something to make our military stronger. This is not only about protecting our territorial and maritime interests, but also our interests overseas.”

Last month, China joined a slew of East Asian nations in signing the world’s largest free trade deal, the Regional Comprehensive Economic Partnership (RCEP), which encompasses 30% of global gross economic product. The deal notably excludes the United States, but includes a number of US regional allies, including Japan, South Korea, Australia and New Zealand, as well as a number of nations the US has tried to drive away from Chinese influence, such as members of the Association of Southeast Asian Nations (ASEAN).

As 2020 draws to a close, China will be the only major nation to record positive economic growth for the year. Although it clocked a modest 2% growth in 2020, its performance was incredibly lopsided, with the first half of the year being dominated by sharp contractions due to shutdowns as the COVID-19 pandemic began. However, Beijing’s quick and thorough response ensured that the economy had restarted by mid-year, and by November the country was setting export records compared to prior years.