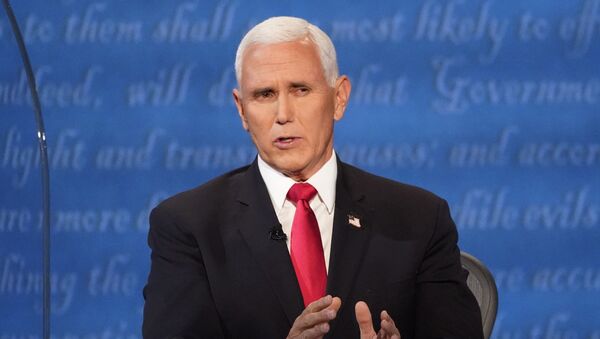 Evan Craighead
All materialsWrite to the author
Sources close to US Vice President Mike Pence previously said he would travel overseas to the countries of Bahrain, Israel and Poland shortly after the conclusion of the January 6 joint session of Congress, which will presumably see the body formally confirm US President-elect Joe Biden as the winner of the 2020 presidential election.

A spokesperson for the US Embassy confirmed to The Times of Israel on Wednesday that Pence's planned visit to Israel had been canceled. Officials did not disclose a reason for the cancellation of the trip, which was slated to be the outgoing vice president's final visit to Israel before leaving office.

Earlier this month, a government document viewed by Politico reportedly showed that Pence would be taking his first overseas trip amid the COVID-19 pandemic to Bahrain, Israel and Poland following the January 6 congressional joint session, where bipartisan representatives from both legislative chambers will perform an official, out-loud count of the Electoral College votes from the presidential election.

Additional stops in Belgium and other countries were also said to be open to consideration, but all stops have been nixed from the vice president's schedule, Bloomberg reported, citing sources familiar with the matter.

“Pence is planning on visiting Israel. I don’t want to commit to the dates. It’s likely that during the trip itself there will be a declaration of normalization” with another Muslim country, he said earlier this month, as reported by the Times of Israel.

Pence's last trip out of the country was back in January of this year, when he visited Rome, Italy; and Jerusalem, Israel.

Speculation quickly followed the report about Pence's future travels, with many arguing that the vice president's trip was organized to avoid any possible in-person fallout from those angered by the January 6 congressional joint session.

“I cannot vote to certify the Electoral College results on January 6 without raising the fact that some states, particularly Pennsylvania, failed to follow their own state election laws. And I cannot vote to certify without pointing out the unprecedented effort of mega corporations, including Facebook and Twitter, to interfere in this election, in support of Joe Biden," Hawley said in a Wednesday news release.

"At the very least, Congress should investigate allegations of voter fraud and adopt measures to secure the integrity of our elections. But Congress has so far failed to act."

Sen.-elect Tommy Tuberville (R-AL) has also floated the idea that he may oppose certifying the Electoral College vote on January 6.