One Year Anniversary of Chinese Doctor Blowing Whistle on COVID-19 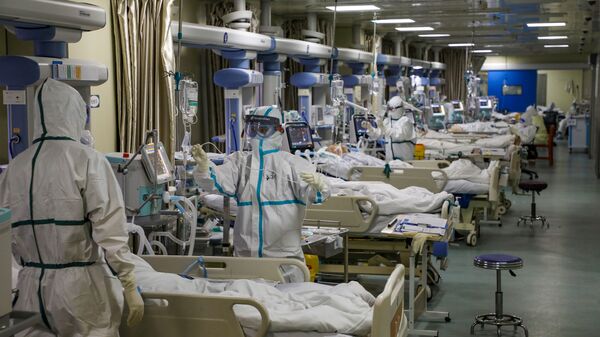 MOSCOW (Sputnik), Tommy Yang - Wednesday marks the one-year anniversary of Chinese doctor Li Wenliang first warning the world about seven patients being infected with a virus, which turned out to be the new coronavirus that triggered the global pandemic.

At 5:43 p.m. (09:43 GMT) on 30 December last year, Li shared a picture of the lab results of a patient who was confirmed to be infected by a coronavirus, similar to the one that caused the deadly Severe Acute Respiratory Syndrome (SARS) epidemic in China in 2003, in a social media group chat for doctors in Wuhan.

Li’s message spread quickly among local social media groups and triggered heated discussions among residents, as most people in China had vivid memories of the devastation and chaos during the SARS epidemic in 2003.

A day after the message was published, the Wuhan Health Commission issued a statement on its official website that said that the city was investigating 27 viral pneumonia patients.

"As of now, we have not observed obvious signs of human-to-human transmission and no healthcare personnel was found to be infected," the statement said.

At the same time, the Wuhan police summoned Li and seven other doctors in the city and issued them an official warning for spreading what was called false rumours.

"Recently, our city’s medical facilities received many pneumonia patients and the local health commission issued reports on the situation. But some internet users published and shared false information without verification and cause an adverse impact on society. The police have summoned eight violators and dealt with them in accordance with the law," the Wuhan police said in a statement on its official Weibo account on 1 January.

Chinese state media, led by the China Central Television (CCTV), repeated the statement from Wuhan police about the eight "rumourmongers" throughout the next day and warned others in China not to believe in such "false rumours."

While the new coronavirus was spreading in the city, local authorities in Wuhan continued to deny the fact the virus can be transmitted between humans, an important indicator of whether the new virus is contagious and could lead to a massive epidemic.

Although a group of top Chinese medical experts was dispatched from Beijing to investigate the situation in Wuhan, the experts made the conclusion that "they found no evidence of the new virus could be transmitted between humans," the Wuhan Health Commission said in a statement on 10 January.

Subsequent reports from the Wuhan Health Commission on the epidemiological situation in the city continued to state that there was no evidence that the new virus was capable of being transmitted between humans.

After Xi’s directive was published, the official Xinhua News Agency finally quoted Zhong Nanshan, a top Chinese epidemiologist, as saying that the new coronavirus was confirmed to be able to transmit between humans and a number of doctors and nurses had already been infected.

The Wuhan authorities began to take strict measures to try to contain the ongoing outbreak and placed the entire city under lockdown on January 23.

During an interview with the CCTV on January 27, Wuhan Mayor Zhou Xianwang tried to explain why the city did not reveal sufficient information about the new coronavirus in a timely manner.

"In regards to failing to reveal the information in a timely manner, I hope everyone can understand. It is an infectious disease, which is regulated by the infectious disease law and related information can only be revealed in accordance with the law. As the local government, after obtaining the information, I can only reveal it to the public upon authorization [from the central government]. This was not properly understood at the time," Zhou said.

A doctor from the Wuhan Union Hospital said in early February that about 14 doctors and nurses were confirmed to be infected by a patient at his hospital as early as January 15. However, superiors at the hospital prohibited staff members from releasing this information to the public.

A serological survey released by China’s Center of Disease Control this week revealed antibodies to SARS-CoV-2 in about 4.43 percent of Wuhan residents. In a city of 14 million people, such an infection rate meant the number of infected residents could be around 620,000, which was about 10 times more than the official COVID-19 case count of 50,333.

Unfortunately, Li, the whistle-blower doctor, began to cough and developed a high fever in early January. On 1 February, Li was confirmed to have contracted COVID-19. He died a week later.

Chinese internet users continued to commemorate Li for warning the public about the new deadly coronavirus since then.

This Wednesday, they flooded Li’s Weibo account with messages expressing gratitude toward him.

As of Wednesday, Li’s last post on Weibo has attracted over 3.8 million "Likes" and over one million comments.