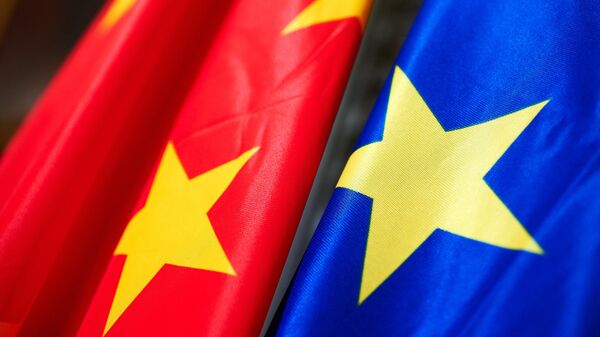 Demond Cureton
All materialsWrite to the author
Seven years of negotiations have concluded just days after Brussels and London agreed on a post-Brexit trade deal and ahead of tensions with the incoming Biden administration, according to reports.

The Comprehensive Agreement on Investment (CAI) was agreed in principle and was “most ambitious outcomes that China has ever agreed with a third country”, Valdis Dombrovskis, EU trade commissioner told FT in a statement.

“We expect European businesses will have more certainty and predictability for their operations. We have some very welcome changes to the rules of the game, because for a long period, trade and investment relations with China have been unbalanced,” he said.

The news comes amid accusations from the outgoing Trump administration on alleged human rights abuses in China's Xinjiang Uyghur Autonomous Region (XUAR), with tensions set to continue under President-Elect Joe Biden in January.

Beijing has repeatedly and routinely slammed the accusations as false.

Asia
China Slams O'Brien's Scramble For Anti-China Alliance In SE Asia After $26.2bn RCEP Free Trade Deal
The deal comes just a month after China inked the Regional Cooperative Economic Partnership (RCEP) with 14 Asia-Pacific countries, including Vietnam, Australia, New Zealand, South Korea and Japan, among many others. RCEP is the world's largest trade agreement in history, valued at $26.2tn and covering a third of the global population.

A New Deal in EU-Chinese Relations

The deal is set to remove barriers to EU companies investing in the mainland, namely in joint ventures and caps on foreign equity, according to an EU press statement.

Industries such as automotive, private healthcare, airport transport services and computing would be secured, Dombrovskis told FT, adding it would boost cooperation on electric vehicles and hybrid motors.

World
Beijing Says China-EU Trade Deal to Conclude 'Soon' as Russia Slams US Over Sanctions Diplomacy
Financial services would receive the same terms as "Phase One" talks between the US and China, the report read.

All matters were resolved in the talks, allowing Beijing to lock in market access rights and boost its manufacturing and renewable energy industries, FT added

​President Ursula von der Leyen tweeted the EU needed to "engage" China and "not just talk to them from a distance".

The deal would uphold EU interests and promote the bloc's core values and provide a "lever to eradicate forced labour. The agreement would also help both sides reach Paris Agreement targets and promote "rule-based multilateralism", she wrote.

World
US To Form Western Pact, Launch Further Restrictions To Counter Beijing Amid Major Push In Trade War
The news comes amid warnings from the outgoing Trump administration, who stated it wanted a global alliance to pressure Beijing on its alleged human rights abuses in Xinjiang, namely allegations on forced labour.

But Tom Wright, senior fellow at the Washington-based think tank Brookings, slammed the deal as "mind-boggling".

“It’s just mind-boggling that the EU would even consider rushing to agree an investment pact with Beijing weeks before Biden takes office after claiming for several years that they wanted transatlantic cooperation on China,” he said.

But Dombrovskis vowed the EU would "engage very closely with [the] US" on trade issues. EU officials raised the concerns to secure commitments from Beijing to ratify and implement International Labour Organisation (ILO) rules.

The deal is set to be ratified by both sides and is expected to take effect in early 2022, EU official said.

The news comes days after the EU and UK agreed on a post-Brexit trade deal on Christmas Eve, just days ahead of the 31 December transition deadline, with EU chiefs signing the deal at the European Council in Brussels.

The Deal is In: What to Expect After London, Brussels Ink Long-Awaited Post-Brexit EU-UK Trade Deal
Both sides agreed on trade, confidential information exchanges and cooperation on the peaceful use of atomic energy, among others. British prime minister Boris Johnson vowed to work closely with the EU after Brexit rules entered force.

The deal will need to be approved by EU member-states and ratified both by the European parliament and Westminster.

​The British Prime Minister addressed Commons on Wednesday and is expected to provide further updates in the afternoon.