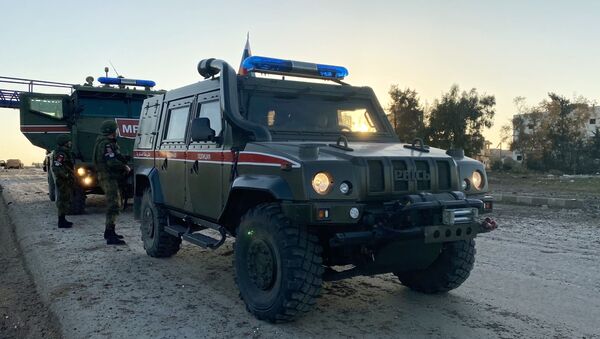 © Sputnik / Mikhail Alaeddin
/
Go to the mediabank
Subscribe
International
India
Africa
MOSCOW (Sputnik) - An armored personnel carrier of the Russian military police in Idlib was fired on from an anti-tank missile system in an area under the control of pro-Turkish militants.

Three Russian soldiers were slightly injured, according to Rear Adm. Vyacheslav Sytnik, deputy head of the Russian center for the reconciliation of warring parties in Syria, on Tuesday.

"On December 29, at 15.45, during the security operation related to the withdrawal of the Turkish observation post in the area of ​​the Trumba settlement in the southeastern part of the Idlib de-escalation zone, an armored personnel carrier of the Russian military police BTR-82A was fired upon from an anti-tank missile system from the territory under the control of the pro-Turkish bandit formations. Three Russian servicemen were slightly injured," he said.

According to Sytnik, the victims were promptly evacuated to a military hospital, where they received necessary medical assistance.

"Nothing threatens the health of the servicemen," he added.

The command of the Russian forces in Syria, together with the Turkish military and the Syrian authorities, is identifying militants involved in the attack on the Russian military, Sytnik said.