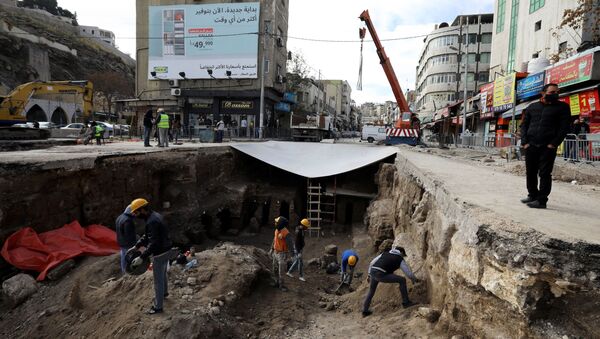 Andrei Dergalin
All materialsWrite to the author
Yazid Elayan, head of Jordan’s Department of Antiquities, insisted that authorities balance the "needs of the city" alongside the preservation of ancient relics that rest beneath the streets.

A special commission set up two weeks ago in Amman, the capital of Jordan, is now expected to decide on how to proceed with a drainage system project in the city that has been put on hold amid the discovery of the ruins of ancient Roman baths during the excavation process.

According to Reuters, the "remnants of furnaces" found are "a sign of an elaborate heating system", as archaeologists suggest that it is "the first such discovery" amid the remains of what once was Philadelphia, the ancient city on which Amman was built.

"We will balance the needs of the city - to protect it from flooding - to preserving antiquities under the streets," Yazid Elayan, head of Jordan’s Department of Antiquities, said. "Amman was one of the biggest Roman cities and it has one of the largest baths [...] Wherever one excavates in Amman, antiquities can be found."

With construction now temporarily suspended, authorities will have to decide "whether to expand excavations at the site or go ahead with an underground canal that would divert flood water that descends on Amman from the surrounding hills", the news agency notes.