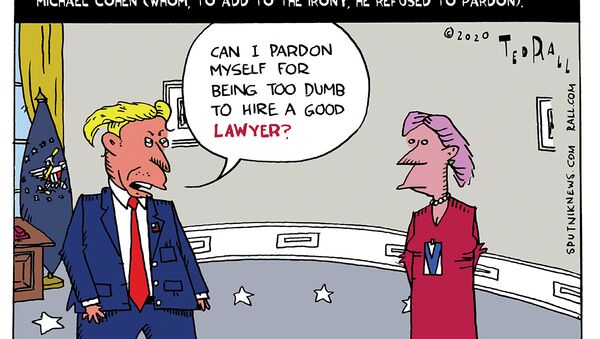 Ahead of his January exit from the White House, US President Donald Trump has recently taken the opportunity to commute various sentences and issue multiple pardons for allies, including former campaign officials George Papadopoulos, Roger Stone and Paul Manafort, among dozens of others.

Michael Cohen, who previously served as Trump’s longtime attorney and fixer, remarked late Monday that the multitude of pardons his former boss issued could come back to ruin him if those who received pardons are forced to testify against him.

“This produces a very significant problem for Donald Trump, in the fact that once you get that pardon, you’re no longer able to invoke the Fifth Amendment ... because you cannot be charged,” Cohen said during an interview with MSNBC’s Ari Melber. “All of these people may ultimately be his downfall simply because they’ll be testifying against him either for a court or a tribunal.”

The Fifth Amendment to the US Constitution protects Americans from being forced to make statements implicating themselves in criminal activity. Incidentally, reports previously emerged that Cohen had reached out to Trump about a pardon after the 2018 FBI raid on his home and work office, but that the commander-in-chief refused to issue one.

To date, Trump has granted clemency to 70 individuals, 41 of whom were pardoned for past offenses just last week. Political insiders suspect Trump may continue to grant additional pardons to allies such as lawyer Rudy Giuliani and even his older children.