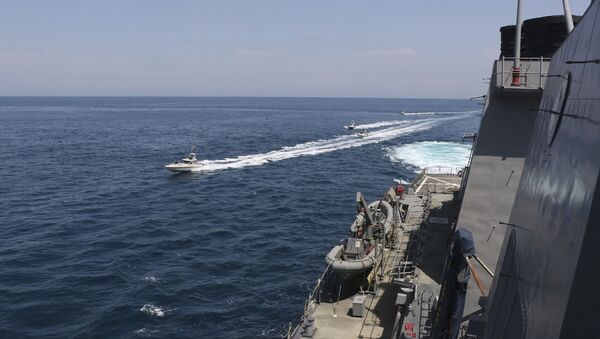 © AP Photo / U.S. Navy
Subscribe
International
India
Africa
Svetlana Ekimenko
All materialsWrite to the author
Amid heightened tensions in the Persian Gulf, marked by media reports of an Israeli submarine arriving in the region, and US warships deployed for naval drills, the Iranian Foreign Ministry has voiced hopes for de-escalation ahead of the upcoming change of administration in the White House, while intimating that Tehran was ready for "any scenario".

Tehran has yet again issued a message to deplore increased military movements by Washington amid heightened tensions in the region. The secretary of Iran's Supreme National Security Council underscored in a Monday tweet that the currently escalated "mobility" of the American military was no more than a "defensive show" generated by "fear of the consequences" for its past transgressions in the area.

​Shamkhani's statements came as Washington and Tehran have been on heightened alert over their respective movements ahead of the anniversary of a succession of events in late 2019 and early 2020 that have fuelled the already tense relations between the two countries.

​In a recent show of force in the Persian Gulf, Israeli media reported on 21 December that an Israeli Navy submarine had crossed Egypt's Suez Canal connecting the Mediterranean to the Red Sea, while on the same day the US Navy shared images of the Ohio-class submarine USS Georgia and accompanying cruisers crossing the Strait of Hormuz.

​A US Navy official confirmed to Fox News that the latest movements in the Persian Gulf had been planned ahead of the approaching anniversary of the killing of top Iranian General Qasem Soleimani, the head of the Islamic Revolutionary Guard Corps' (IRGC) Quds Force, in Iraq on 3 January 2020 by an American drone.

Earlier, in September, the US Navy announced that one of its aircraft carriers had sailed through the Strait of Hormuz and entered the waters of the Persian Gulf.

The US 5th Fleet said the strike group was led by the USS Nimitz and included two guided-missile cruisers, the USS Princeton and USS Philippine Sea, and a guided-missile destroyer - USS Sterett.

The mission, according to the statement, was aimed at "operating and training" with US partners.

Responding to these moves by Washington, Iran's security chief took to Twitter on 28 December to say that this would only serve to "intensify insecurity" and result in "harmful misunderstandings".

US-Iran tensions have surged since Washington blamed Tehran for a rocket attack on the US Embassy compound in Baghdad on 20 December.

One local civilian died, while no embassy personnel were killed or injured in the attack, according to NPR, citing US diplomatic sources.

US Secretary of State Mike Pompeo strongly condemned the attack by "Iranian-backed militias" on the international zone in Baghdad.

President Donald Trump on 23 December even tweeted some "friendly health advice to Iran", warning that in the event of any American deaths, he would hold Tehran responsible, also posting a picture of three unexploded rockets allegedly found near the attack site.

​Iran later denied the US allegations that it played any role in the recent attacks targeting Washington's embassy in Baghdad. Instead, it has accused the American administration of fanning the flames of further instability in the volatile region.

"We do not seek tensions, but responsibility for any consequences of risky actions that lead to an escalation of tensions is on the US. You certainly know that Iran will not joke with anyone when it comes to our national interests and security", he said, while adding that Tehran was "ready for any scenario".

"I hope that in these last days before [US President Donald Trump] leaves the White House, they will stop escalating tensions", the spokesman added.

The Kuwaiti newspaper Al-Qabas reported that Tehran was allegedly boosting its air defence capabilities near nuclear facilities as a precaution against possible American military strikes before the end of Donald Trump's term, as bellicose mutual rhetoric has been heard since the late November assassination of Iran's top nuclear scientist, Mohsen Fakhrizadeh, who helped lead the country’s nuclear programme.

Iran's Supreme National Security Agency had claimed that Israeli spy agency Mossad and the Iranian "People's Mujahedin Organisation" were involved in the killing.