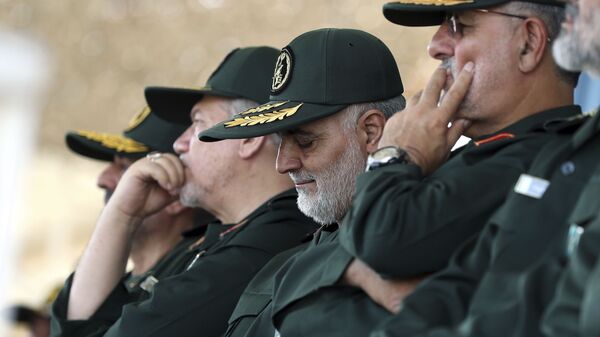 Ilya Tsukanov
All materialsWrite to the author
3 January will mark the one year anniversary of the assassination of Quds Force commander Qasem Soleimani in Baghdad in a US drone strike. Iran responded to the killing by launching ballistic missiles at two US bases in Iraq, and threatened further attacks. The Pentagon was put on alert earlier this month, citing a “heightened risk” from Iran.

The Islamic Republic of Iran may not need to resort to direct military action as a means to avenging its slain commander, Iraj Masjedi, Iran’s ambassador to Iraq has said.

“Revenge for the assassination of General Soleimani is not a military action necessarily, rather, the expulsion of American forces from the region can be revenge for General Soleimani’s blood,” Masjedi said, his comments to local media cited by Tehran Times.

The ambassador also warned Iran continues to reserve the right to take revenge against Washington over the “historic crime” of the murder of Soleimani and Abu Mahdi al-Muhandis, a top Baghdad-allied Shia militia commander who died alongside the Quds commander in the 3 January attack in the Iraqi capital.

Masjedi also reiterated that contrary to the Trump administration’s claims, Iran and its allies were not behind the recent rocket attack on the US Embassy compound in Baghdad.

Last week, Secretary of State Mike Pompeo accused “Iran-backed militias” of responsibility for the attack on the Baghdad Green Zone,” characterizing the culprits as “violent and corrupt criminals” and demanding that they “cease their destabilizing actions.” The area of the so-called "International Zone" ("Green Zone"), is where the Palestine Hotel, the Monument to the Unknown Soldier, the US Embassy, and the former airport seized by Allied forces in March 2003 are located.
© Sputnik / Sergey Mamontov
/
Go to the mediabank

Iranian officials dismissed the US claims, indicating that Iran does not tolerate the targeting of diplomatic facilities and calling the timing of the US claims “suspicious.” Kata’ib Hezbollah, the Iran-affiliated, Iraqi-government allied Shia militia which the US blamed for attacks last December which ultimately culminated in Soleimani’s killing, similarly distanced itself from the recent artillery barrage against the Green Zone.

The December Embassy attack was followed shortly after by a US guided missile submarine with as many as 154 Tomahawk cruise missiles onboard making its way into the Persian Gulf, with that development followed by an Israeli submarine crossing the Suez Canal in what Israeli media interpreted as a “message” to Iran. Tehran dismissed the US activity as a “show of defiance and fear.”

Trump Threatens Iran, Tweets Rocket Photos Claiming to Prove Complicity in Baghdad Embassy Attack
On Christmas Eve, President Trump tweeted a new warning to Iran, saying that “if one American is killed” he would “hold Iran responsible.” Along with the tweets, Trump posted a photo of dud rockets with English-language labels which he alleged were somehow indicative of Iranian involvement. Iranian Foreign Minister Mohammad Javad Zarif responded by accusing Trump of using a “worthless photo to recklessly accuse Iran.”

Last week, Gen. Kenneth ‘Frank’ McKenzie, commander of USCENTCOM, the command responsible for US operations in the Middle East, warned that the region was “in a period of heightened risk,” but stressed that the US was “not looking to escalate” and “not looking for war with Iran.”

Aside from the upcoming anniversary of Soleimani’s death, tensions in the region have been ratcheted up in the wake of the 27 November assassination of Mohsen Fakhrizadeh, a senior Iranian nuclear physicist and missile expert, outside Tehran. Iran blamed Israel for the killing and threatened to respond. Israeli officials did not publicly comment on the event, although one anonymous Israeli official told the New York Times that Tel Aviv should be “thanked” by the world for killing the scientist.