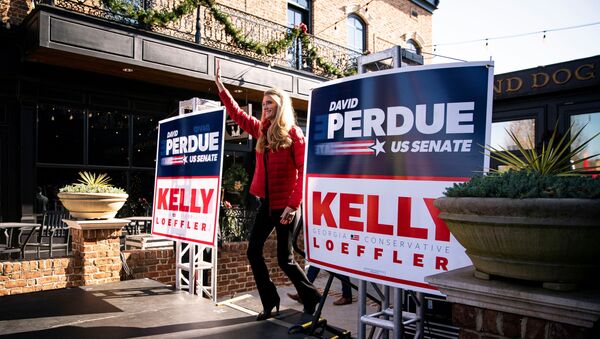 Lilia Dergacheva
All materialsWrite to the author
A strong push for increased stimulus cheques has been made recently by outgoing President Donald Trump, who lambasted the coronavirus relief package previously passed by the Congress as “ridiculously low” and a sheer “disgrace”.

Republican Senators Kelly Loeffler and David Perdue have both endorsed boosting payments to citizens in the coronavirus relief package from $600, as initially proposed, to $2,000 per person, which Donald Trump has also pushed for.

POTUS' calls even put him at loggerheads with the Senate GOP leadership, who strictly opposed the increase, while Democrats, Loeffler’s and Perdue’s opponents Rev. Raphael Warnock and Jon Ossoff among them, have readily supported it.

"I've stood by the president 100% of the time. I'm proud to do that and I've said, absolutely, we need to get relief to Americans now and I will support that", Loeffler told Fox News in an interview, when asked if she would back the motion.

"President @realDonaldTrump is right — I support this push for $2,000 in direct relief for the American people".

The duo will take on Democrats Jon Ossoff and Reverend Raphael Warnock in two Senate runoff votes scheduled to take place in Georgia on 5 January, and at least one of the Republicans needs to win for the GOP to retain its Senate majority.

The lawmakers’ remarks came a day after the House moved to adopt the measure to increase the amount offered in the second round of stimulus cheques to $2,000, in the wake of sitting President Donald Trump’s lamentation that the greenlit $600 direct payments are “ridiculously low”. He referred to the relief aid passed by the US Congress as a “disgrace”, thundering that it would provide little funding for Americans, but rather for foreigners.

There were, however, questions raised about the fate of the measure as it heads to the US Senate floor, with the Republican-majority chamber having earlier opposed the legislation.

Senate Majority Leader Mitch McConnell has not yet indicated whether he will bring the measure to the Senate floor for a vote.

After Trump had his say, several GOP senators, including Sens. Marco Rubio (R-Fla.) and Lindsey Graham (R-S.C.), as well as co-sponsor Sen. Josh Hawley (R-Mo.), expressed determination to vote in favour of the $2,000 cheques. 60 votes are needed in the Senate to pass the bill.

In the new round of stimulus cheques since the first virus outbreak, Americans eligible for the $600 payments include individuals with an adjusted gross income of $75,000 or less on their 2019 tax files, couples who filed jointly and made $150,000 or less, and heads of households who made $112,500 or less.

At least 1,899 new coronavirus deaths and 189,044 new cases were reported in the United States on 28 December, with the total tally hitting 19.3 million, according to state and local health agencies.

Over the past week, there has been an average of 183,140 new cases per day, a decrease of 13 percent from the average two weeks earlier. The most affected state is still California, where the worsening outbreak has overtaken progress made in other parts of the country.