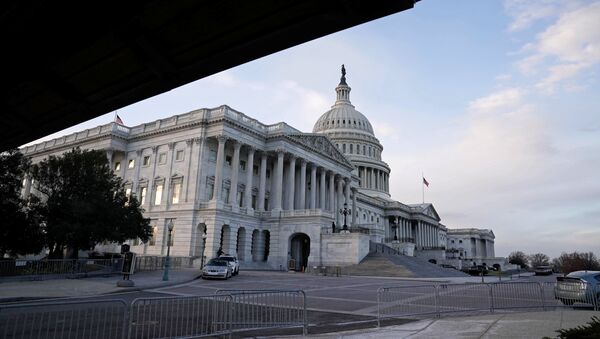 © REUTERS / KEN CEDENO
Subscribe
Gaby Arancibia
All materialsWrite to the author
The US House of Representatives took up efforts to increase the amount offered in the second round of stimulus checks to $2,000 after US President Donald Trump referred to the approved $600 direct payments as “ridiculously low.”

The House voted on Monday to approve a new measure that would significantly increase the dollar amount of federal direct payments the US government previously approved for Americans struggling to make ends meet amid the COVID-19 pandemic.

The measure cleared the chamber by a vote of 275 to 134. A total of 231 Democrats and 44 Republicans voted in favor of the legislation.

The congressional vote, which comes one day after Trump signed the $2.3 trillion pandemic relief package and full-year government spending bill into law, would boost federal stimulus checks from $600 to $2,000.

Ahead of the vote, US Rep. Kevin Brady (R-TX) remarked on the House floor that funding increase was "hastily dropped on us at the last minute." He added that he was concerned "this whopping $463 billion won’t do what’s needed, stimulate the economy or help workers get back to work."

A senior official with the US Department of the Treasury informed CNBC that should both chambers approve the $2,000 checks, the financial agency will simply add on the $1,400 difference. The $600 direct payments are expected to start rolling out to Americans who fit the bill in the coming weeks.

However, now that the measure heads to the US Senate, its fate is uncertain, as the Republican-held chamber opposed measures earlier this month to pass legislation allowing for $1,200 stimulus checks. Senate Majority Leader Mitch McConnell (R-KY) has yet to signal whether he will bring the vote to the floor.

Under the second round of stimulus checks, Americans eligible for the $600 payments will include individuals who reported an adjusted gross income of $75,000 or less on their 2019 tax returns, couples who filed jointly and made $150,000 or less, and heads of households who made $112,500 or less.

A strong push for $2,000 stimulus check came last week after Trump referred to the COVID-19 relief aid passed by the US Congress as a “disgrace” because it provided little funding to Americans, but offered hefty foreign aid.

“It’s called the COVID relief bill, but it has almost nothing to do with COVID,” Trump said in a video shared online. “Congress found plenty of money for foreign countries, lobbyists and special interests while sending the bare minimum to the American people.”

Trump's call were quickly picked up and hailed by Democrats, including House Speaker Nancy Pelosi (D-CA), who remarked on Twitter that "Democrats are ready to bring this to the floor this week by unanimous consent." US President-elect Joe Biden has also indicated that he supports $2,000 payments to Americans.

The first round of stimulus checks from the US government was released months ago and amounted to $1,200 each. The first aid package also included increased unemployment benefits.