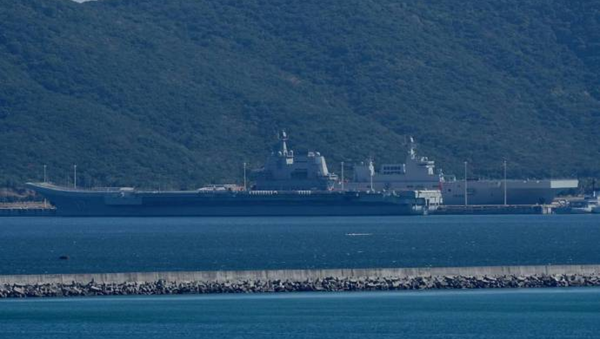 Morgan Artyukhina
All materialsWrite to the author
China’s new class of amphibious assault ship - part helicopter carrier, part marine landing dock - is growing quickly. While the first Type 075 ship is finishing up sea trials alongside its bigger comrade, the aircraft carrier Shandong, the third one is coming together in a Shanghai shipyard.

New photos from the Hudong-Zhonghua shipyard in Shanghai that emerged online show China’s third Type 075 landing helicopter dock (LHD) is taking shape. Although the steel hull remains exposed, the flight deck appears mostly complete, and the island superstructure is installed on the ship’s starboard side.

​However, the photos only show the warship from the bow end, leaving no hint of the progress made in building the rear well dock, from which marines in amphibious landing craft would disembark to assault an enemy beachhead. Construction only began earlier this year, but the Type 075s have been assembled at a breakneck pace. By comparison, the US Navy's USS Tripoli amphibious assault ship, launched in 2017 and roughly the same size as the Type 075, took nearly three years to construct, according to Forbes.

Meanwhile, the first Type 075 has been spotted anchored alongside the carrier Shandong at the Yulin Naval Base in southern Hainan. First launched in September 2019, the warship is going through the final stages of its sea trials, after which it will be christened with a name and join the fleet in the South China Sea.

​The two warships were also spotted by satellite:

​The conjunction is perhaps the first known meeting of China’s two classes of aircraft carrier. Although smaller than the Shandong and incapable of carrying the fixed-wing aircraft it sports, the Type 075 can carry some 30 helicopters and is larger than the aircraft carriers of many nations, including Italy, Spain, Japan and Thailand.

Last week, the second Type 075 performed its first sea trial, briefly venturing out into the East China Sea from the Shanghai shipyard where the third LHD is being built.

Extensive fleet expansion for the People’s Liberation Army Navy is included in the recently drafted 14th Five-Year Plan presented last month. By 2025, Beijing aims to have begun construction on five more Type 075 LHDs, and development of the Type 076 “assault carrier,” which was reported on earlier this year, hopes to be in full swing, according to The Diplomat. However, the outlet notes the economic proposal conspicuously omits estimates on aircraft carrier construction. These capital ships are, of course, accompanied by a slew of new smaller warships, including the huge Type 055 missile cruiser.