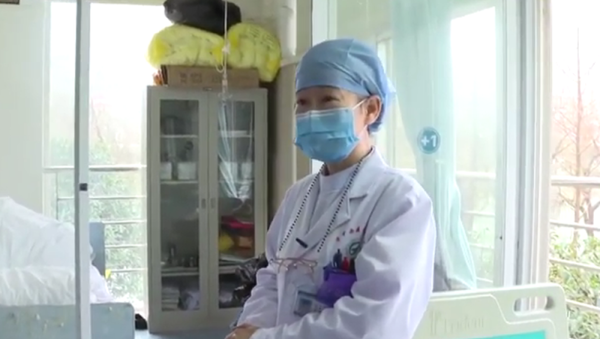 Morgan Artyukhina
All materialsWrite to the author
While the US government and mainstream media have attempted to rewrite the history of the opening stages of the COVID-19 pandemic to pin the blame for the outbreak on China, one of the central figures of that period has reaffirmed the speed and accuracy of the medical response in Wuhan.

On Sunday, China commemorated the first anniversary of the first reporting of COVID-19 by Zhang Jixian, director of respiratory medicine at the Hubei Provincial Hospital of Integrated Chinese and Western Medicine. In an interview with Chinese media, Zhang rejected the narrative of a government coverup in the outbreak’s early stages forwarded by the US state and mainstream media

“After I first reported the outbreak situation, we started to regularly report the epidemic information to the world beginning from January 3, 2020,” she said, according to the South China Morning Post, noting it “certainly did not conceal the relevant data on the epidemic.”

“The facts are so clear, how can it be called a cover-up?”

On December 27, 2019, Zhang became the first to piece together that several of the hospital’s patients were suffering the same set of unusual symptoms: a cough, fever and infected lungs that appeared pneumonia-like. While they came from two different families, Zhang quickly pieced together their connection via the Huanan Wet Market, which sells a variety of live and frozen animals, and forwarded the report to Jianghan district Center for Disease Control and Prevention (CDC).

This provided the basis for identifying more cases that rolled into the medical center in the coming days. On January 1, the wet market was closed, and on January 3, Chinese authorities shared their information with the World Health Organization (WHO), the European Union and the governments of Japan, South Korea, the US and UK, among other nations.

By January 12, Chinese researchers had sequenced the genome of the virus and confirmed it was different from SARS-CoV-1, the virus that causes severe acute respiratory syndrome (SARS), a disease that infected over 8,000 people and killed 774 between 2002 and 2004. The new virus was provisionally named 2019-nCOV until the International Committee on Taxonomy of Viruses gave it the official name SARS-CoV-2 in early February.

Indeed, during the first weeks after the emergence of this “pneumonia of unknown origin,” China’s quick response was hailed around the globe, including in the United States, where US President Donald Trump changed his tune and began alleging a coverup once his own government failed to contain cases of COVID-19 that arrived in the US.

China has been working very hard to contain the Coronavirus. The United States greatly appreciates their efforts and transparency. It will all work out well. In particular, on behalf of the American People, I want to thank President Xi!

​“China has been working very hard to contain the Coronavirus,” Trump tweeted on January 24, 2020. “The United States greatly appreciates their efforts and transparency. It will all work out well. In particular, on behalf of the American People, I want to thank President Xi [Jinping]!”

Indeed, by early February, the US media had picked up on a supposed “whistleblower” case, that of Wuhan doctor Li Wenliang, who faced reprimand at work after sending incorrect and alarming messages to school colleagues. The ophthalmologist, who had no role in treating the few dozen COVID-19 cases in Wuhan in late December, told colleagues the as-yet unidentified virus was SARS and shared photos of a private medical record.

At the time, Li’s claims were unfounded, and he was reprimanded but neither fired nor arrested, as western media has since claimed. He did not “warn about the coronavirus outbreak,” as the New York Times claimed, as his messages were sent on December 30 - three days after Zhang alerted the local CDC. Li died of COVID-19 in early February.

A late eulogy of the doctor in Politico on Saturday shows the extent to which US media has reimagined China’s response, claiming Li’s actions and subsequent death caused a sea-change in how the Chinese government reported the virus, including causing Beijing to issue daily reports on COVID-19 cases and deaths. However, China began making daily reports on those issues on January 11, before human-to-human transmission was proven and before SARS-CoV-2 was positively identified as a unique pathogen.

By April, as COVID-19 cases and deaths skyrocketed in the United States, Trump had accused the WHO of “mismanaging the crisis” and of being controlled by Beijing, which he said manipulated its data reports to conceal the extent of the outbreak. Trump subsequently announced the US was pulling out of the WHO by the summer of 2021, although incoming US President-elect Joe Biden has promised to reverse the move.

In early January 2021, an international team from the WHO will venture to Wuhan in an effort to track down the origins of the virus and if it came from animals, how it made the leap into humans.

SARS was proven in 2017 to have originally been a disease that infected a species of horseshoe bat, and similar suspicions arose in early 2020 about bats being the origin of COVID-19 as well. However, a more recent hypothesis the WHO hopes to test is that the virus arrived in frozen food shipments from elsewhere.

Wu Zunyou, the chief epidemiologist of the Chinese Center for Disease Control and Prevention, told the state outlet last week that subsequent outbreaks of COVID-19 in Beijing, Dalian and Qingdao were also connected to frozen seafood markets, further suggesting a connection.