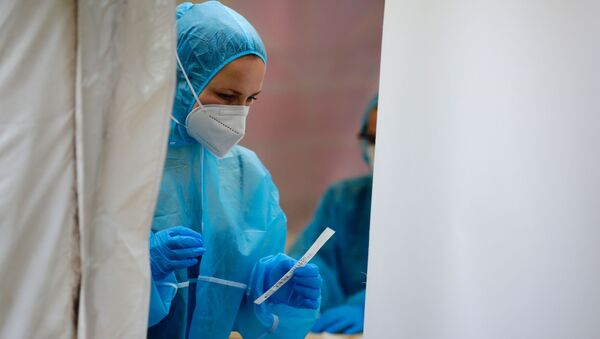 BERLIN (Sputnik) - A new coronavirus strain that first emerged in the UK earlier this month was present in Germany in November, the German Die Welt newspaper reports.

According to researchers at Hannover Medical School, an elderly man who had underlying medical conditions contracted the new variant of the COVID-19 coronavirus around November, the newspaper said. The man has died from the disease, while his wife and daughter, who also tested positive, have recovered, according to reports.

The health ministry of Lower Saxony, which released the Hannover research results on Monday, said that the daughter of the deceased man traveled to the United Kingdom in mid-November and there became infected with the new virus strain.

Last week, German media reported that the first case of the new coronavirus variant in the country was reported in the state of Baden-Wuerttemberg. An infected woman arrived in Germany from the UK on December 20 and entered self-isolation.

Earlier this month, UK health officials announced that the country had identified a new variant of the coronavirus that spreads faster than other Sars-Cov-2 virus strains. Many countries have suspended passenger travel to and from the United Kingdom in a bid to prevent the import of the new virus strain.

The new coronavirus variant, which infects more easily but does not appear to be more deadly or pose any concern for vaccines, has been detected in several countries including Canada, Denmark, Belgium, France, the Netherlands, South Africa, Australia, and South Korea.