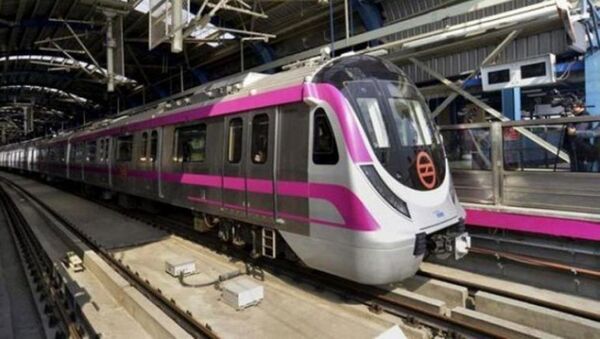 Radhika Parashar
All materialsWrite to the author
New Delhi along with other cities like Ghaziabad, Gurugram, Noida, and Faridabad surrounding the Indian capital makes up a large area called the "National Capital Region" or NCR. The metro train services covering all of the NCR act as the region's lifeline, helping millions of people to commute from one area to another every day.

Marking another milestone for the NCR's metro services, Indian Prime Minister Narendra Modi on Monday inaugurated the country's first self-driving metro train in Delhi. The fully automated driverless train will be running on the 38-kilometre magenta line of the Indian capital that connects 25 metro stations - from the Janakpuri West area to the Botanical Garden metro station located in Noida.

Addressing the inaugural ceremony, PM Modi said that steps like bringing in driverless metro trains testify to the rapid speed at which India is progressing towards adopting more smart systems.

"Make In India is very important for the expansion of metro services. It reduces cost, saving foreign currency, and provides more employment to the Indian people", Modi added.

Congrats India 🇮🇳!
india get its first driverless fully-automated Metro train, running from Delhi to Noida. It will be flagged off by Prime Minister Narendra Modi today.https://t.co/YwoCzEHzBD pic.twitter.com/kLUIm5SJqy

​With the launch of this new-generation of electronic trains, the Delhi Metro Rail Corporation (DMRC) has officially entered the elite league of "seven percent of the world's Metro networks" that can operate services without drivers.

This was the first major event dedicated to the Delhi Metro services this year after the trains remained suspended for almost six months due to the pandemic-caused lockdown.

The central government of India is also working on deploying in-train Wi-Fi services for riders in the capital.