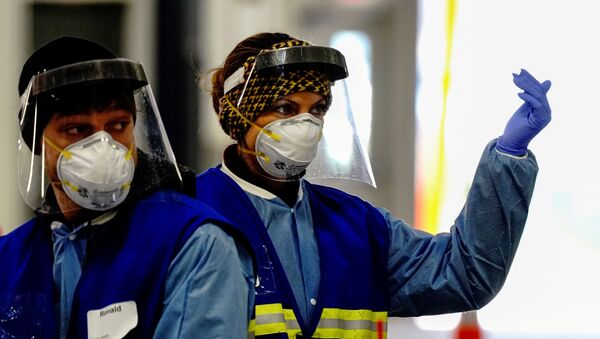 Gaby Arancibia
All materialsWrite to the author
The latest figures by Johns Hopkins University (JHU) indicate that more than 19.1 million COVID-19 cases have been documented in the US since the onset of the pandemic. As of Monday, over 150,000 new cases were recorded nationwide, as the viral outbreak continues to spread in the hard-hit US state of California.

Dr. Anthony Fauci, the director of the US’ National Institute of Allergy and Infectious Diseases, stated during a Monday interview that surging COVID-19 cases, hospitalizations and deaths were largely due to the US’ “federalist approach” to handling the respiratory illness.

The top health expert, who also happens to serve as a member of the White House coronavirus task force, explained during a BBC Radio 4 interview that a lack of a consistent strategy to tackle the virus was a “major weakness” in combating the pandemic.

“The fundamental tenet of our government is the federalist approach, where you have the United States of America, which is 50 states and essential government,” Fauci said. “But the states are very often given a considerable amount of leeway in doing things the way they want to do it, as opposed to in response to federal mandates, which are relatively rarely given.”

However, Fauci acknowledged that while the “federalist approach” works “for certain things,” it’s not exactly ideal when you’re trying to get a handle on a pandemic. The health official underscored that a virus “doesn’t know the difference between the border of New York and New Jersey, or Florida and Georgia, or Texas and Oklahoma.”

“What we’ve had was a considerable disparity with states doing things differently in a non-consistent way,” Fauci noted. “There have been a lot of factors that have led to the fact that, unfortunately for us, the United States has been the hardest hit country in the world, but I believe that disparity among how states do things has been a major weakness in our response.”

Although US President Donald Trump did release a set of guidelines for states to follow, the commander-in-chief left the burden on states to decide how to deal with the pandemic's effects while he promised to provide needed supplies.

Fauci further stated that political polarization was also to blame for the varying COVID-19 countermeasures by US states. Early on in the pandemic, both masking and social distancing guidelines were turned into a political showdown, with many Americans arguing that their rights were being attacked.

And yet, despite opposing beliefs to the guidelines, Fauci stressed that such measures need to be kept in place until both of the currently approved COVID-19 vaccines are made widely available to the public. “Until we get that veil of protection, then we are constantly going to be challenged,” he said.

With a positivity ratio of just over 10%, the US remains the country with the highest COVID-19 case tally. At present, the US states being impacted the hardest in terms of new cases are California and Tennessee, both now considered epicenters for the disease.

The latest forecast from the US’Centers for Disease Control and Prevention suggests the American death toll may increase by nearly 28,000 by the week ending January 16, 2021, and that the tally could reach as high as 419,000. According to JHU’s count, the current death toll has surpassed 333,800.