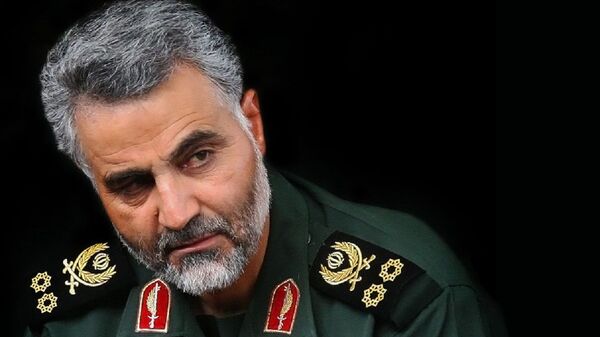 Oleg Burunov
All materialsWrite to the author
Qasem Soleimani was killed in a US drone strike on his car in Baghdad on 3 January. IRGC General Mohammad Hejazi recently stated that "harsh revenge" for Soleimani's assassination remains Tehran's priority, and that retaliatory missile attacks on US military bases in Iraq in January were "only slaps".

Sayyed Hassan Nasrallah, leader of the Lebanese political movement and militant group Hezbollah, has claimed that "the criminal assassination" of top Iranian general Qasem Soleimani in early January "was not only an American crime".

The remarks followed the Iranian news agency Tasnim reporting that new names had been added to the list of American individuals reportedly involved in Soleimani's killing.

The news outlet cited a spokesperson for the Popular Committee for the Celebration of the Anniversary of the Martyrdom of General Soleimani as saying the number of individuals on the list has been raised from 45 to 48, with six countries receiving warrants for the arrest of the alleged culprits.

In a separate development, former Iraqi Prime Minister Nouri Al-Maliki suggested in an interview with Al-Alam TV on Sunday that the US assassinated Soleimani because the head of the IRGC's elite Quds Force ruined US plans "to change the identity of the region", something that "bothered the Americans a lot".

Al-Maliki also compared US actions to those of gangsters rather than a state that chants "slogans of freedom and democracy".

The interview came a few days after IRGC Brigadier General Mohammad Hejazi told reporters that "harsh revenge" for Soleimani's assassination remains Tehran's priority, noting that retaliatory missile attacks on US military bases in Iraq in January were "only slaps".

On 3 January, Soleimani and a senior Iraqi militia commander, Abu Mahdi al-Muhandis, were killed in a US drone strike on their car at Baghdad International Airport. The unmanned aerial vehicle attack was authorised by President Donald Trump.

Iran retaliated by conducting an airstrike on two military bases in Iraq hosting American troops on 8 January, pledging, however, that it was not the last act of revenge on its part and that more will come unless the US withdraws its forces from the Middle Eastern region.

US’ Illegal Killing of Soleimani ‘Same Deal’ as Past Wars Over ‘Sphere of Influence’ - Journo
As commander of Iran's Quds Force, an elite unit of the Islamic Revolutionary Guard Corps (IRGC) responsible for extraterritorial operations, Soleimani was known to be involved in an array of anti-terrorism operations across the Middle East, briefly joining the US in its fight against the Taliban in Afghanistan in 2001. He also assisted the Syrian government in its fight against jihadist militias in the 2010s.

The January developments resulted in a major escalation of tensions between Tehran and Washington, which have persisted since America's unilateral withdrawal from the 2015 Iran nuclear deal, also known as the Joint Comprehensive Plan of Action (JCPOA), and reimposition of strict economic sanctions against the Islamic Republic in May 2018.